When we Honor God, Advanced Machine & Engineering lives out ALL of our core values 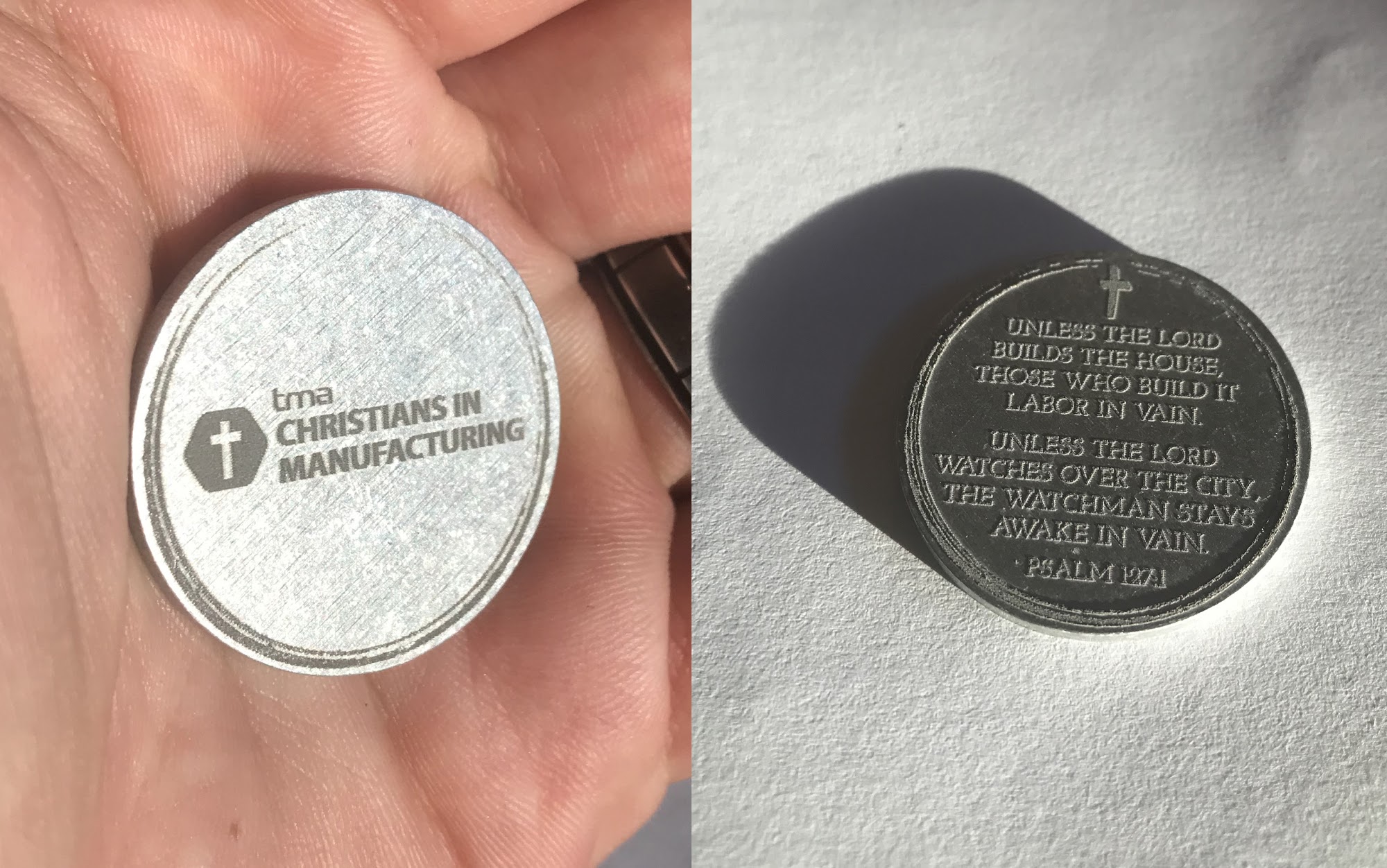 On November 2nd, 2018, a group of manufacturing leaders gathered for the 43rd TMA annual prayer breakfast. It was a very diverse group of businessmen and women, but they all shared something -- a desire to glorify God and boldly share their faith in Christ.

Boldness for Christ is a trait that Advanced Machine & Engineering (AME) has always valued, but prior to this year, we had not explicitly documented our core values. When our CEO Dietmar Goellner made it a priority to define ourselves by our values, it was no surprise that “God Honoring” was the cornerstone of who we want to be and the legacy we want to leave behind.

What has been a bit of a surprise for me this year is learning how many other manufacturers share this same value.

I’ve been amazed at how often I’ve bumped into other manufacturers who have a mission beyond manufacturing. As I’ve developed relationships with metalworking leaders that I admire, our conversations about manufacturing often took a back seat to our conversations about Jesus. It’s been rewarding to exchange stories with influential guys like Titan Gilroy, Jason Zenger, and Barry Walter about how God leads our careers and directs our paths.

During my drive from Rockford, IL to Bolingbrook, IL for the prayer breakfast, I thought to myself:

“Does God have anything to say about manufacturing? What does the Bible say about what we should be making?”

After listening to the stories from my fellow TMA members and hearing how God had authored each of their stories, it became clearer to me what God wants all of us to be building.

Like most success stories, there were storms, disarray, and mistakes long before the clouds broke and the vision became clear and beautiful, but their beliefs helped each of these manufacturing leaders survive their toughest times--it was the friendships and sense of community with other Christians that bolstered their faith.

It’s easy to be tempted to take credit for our own success. Profits don’t come easy in the manufacturing industry. We are a hardworking bunch and when we conquer the hard times to find success, we want to share it with our peers.

There’s nothing wrong with enjoying the satisfaction that comes from working hard to achieve success, but I find the stories that impact me the most are the ones that show God’s strength in our weaknesses. When we find ourselves at the end of our rope with no idea how to correct that quality issue, or make payroll, or recover from the loss of a key employee--that’s when our faith is tested.

And that’s when God shows his strength.

“My grace is all you need. My power works best in weakness. So now I am glad to boast about my weaknesses, so that the power of Christ can work through me.”

As Trevor Olsen from Specialty Plastic Fabricators described his emotional lows during his toughest season, he spoke about how God had planted a vision in his mind of a tree planted by water. He was feeling drained, struggling to thrive, and unsure of where help was going to come from. He had a colleague and fellow believer, who was given the same inkling of a tree planted by the water. He mentioned a verse that he had heard in Church a few months back and all at once--it clicked.

God had planted a seed that explained their vision of a tree planted by the water.

It took time for that seed to take root and sprout the hope Trevor needed, but through a conversation with a brother, they became acutely aware of a passage of scripture with an important message.

“Blessed are those who trust in the Lord and have made the Lord their hope and confidence.
They are like trees planted along a riverbank, with roots that reach deep into the water. Such trees are not bothered by the heat or worried by long months of drought. Their leaves stay green, and they never stop producing fruit.”

Then Debbie Sommers of from Lakeview Precision Machining, another manufacturing leader from the TMA, delivered a keynote presentation documenting her spiritual journey. Debbie’s presentation focused on the challenges of maintaining a work-life balance as a single mother working in a manufacturing company.

For her, it was the fellow believers in her family that helped her get through the toughest times.  That, and an old radio that could only receive one station. That station happened to be the Christian radio station, K-Love. It lifted her spirits and provided the perspective she needed when she was feeling the weight of life.

For Sommers, it was the patient love of her family and of God that stuck with her as she took a few detours to get to where she is today.

As successful manufacturing leaders, Olsen and Sommers have plenty to be proud of and to boast about, but that’s not what they chose to speak about at the prayer breakfast. Instead, they choose to take the spotlight off of their own success and give the glory to Christ.

Advanced Machine & Engineering - Our Story is for God’s Glory

The Journey to America

Advanced Machine & Engineering (AME) has been continually blessed by God’s Glory even before the company was founded in 1966.

Willy Goellner's journey to America is testimony of God’s adoration and compassion. He and his wife didn’t have the appropriate funds for the trip. The Lutheran World Federation along with a good friend of theirs, Jack Seiler, sponsored their trip. They received a loan of $500.00 with no interest for two years.

They were greeted by a volunteer from their Lutheran Church once they arrived in New York City. She guided them to a bus that transported them to the Erie-Lackawanna Rail Station. The train took them to Chicago, IL, where they met their friend, Seiler. He dropped them off at their new apartment that he rented for them in a German neighborhood.

“We were making a journey based on a hope of a new future and that we were in God’s hands.”
-- Willy Goellner, Founder and Chairman of Advanced Machine & Engineering

Giving Back to God

Years later during a time when AME’s money was tight, Willy Goellner wanted to donate funds to help build a church in East Europe.

“At the time, we weren’t really making any money,” says Dietmar Goellner, CEO of AME. “My dad wanted to give sacrificially, which went above and beyond tithing. Eventually, he helped me see the bigger picture of how God would take care of us.”

“God has done so much for me, the least I can do is give back to him.”
-- Willy Goellner, Founder & Chairman of Advanced Machine & Engineering

In 1991, the United States was in the midst of a recession. During that recession, one of AME’s key partners decided that they wanted to try and do their parts on their own. At the time, AME would have lost $1.5M in revenue.

“As we were losing that business, I just started praying, ‘God, we need your helps. We’re going to lay off 25 individuals and we have no idea how to make up for the shortfall,’” claims Dietmar Goellner.

Soon after, Dietmar Goellner received a lead about a company in Lake Mills, WI called APV Crepaco. They were looking for someone to enter into long-term contracts with them on some of their parts that they needed manufactured.

In the ensuing 2 to 3 months, Dietmar Goellner did some negotiating with their purchasing manager and came back to AME with a stack of orders that exceeded the room in his briefcase.

“I thanked the gentleman profusely for his business, and when I got back home, I asked our customer service rep to add up the value of the POs. Their total value just exceeded $1.5M,” says Dietmar Goellner.

It was nothing short of a miracle. Six months later, the company that initially left came back and admitted to making a mistake and gave all of their business back and is still a loyal customer today.

“My philosophy is that all good things come from God. I am extremely grateful for how he cares for us, and in exchange for His glory, I want to be able to give back to those who are in need,” says Dietmar.

A Call to Action for Christians in Manufacturing

So, what does the Bible say we should be building?
Maybe we should help Christ build his Church.  Ephesians 2:19

And to be clear, by the church, I’m not talking about a building. I’m talking about strengthening the community of believers that go through the ups and downs of life, and do business together with the understanding that God is in control of our future. In manufacturing, the highs and lows are inevitable, but the truth of Christ remains constant.

And What does the Bible say we should be making?
Maybe we should help him make disciples.  Matthew 28:19

That’s how we - as Builders - can build the Church

And we need our community of Christian brothers and sisters to remind us about the permanence of those truths; to encourage us to live with an eternal perspective and to challenge one another to stay focused on what matters most in the work we do--boldly sharing the stories of how God uses our careers to bring glory to his name.

That’s the most intriguing part of how these stories work themselves out. When we put our trust in the success of our business, we are building on an unreliable and insecure foundation.  Especially in a cyclical industry where we can’t control the timing of the next recession.

But, when we place our trust in him, God gives us what we need to build a good foundation for the future so we can experience true success. 1 Timothy 6:17-19

Let’s make it our job as Christian manufacturing leaders to redefine what success looks like.  Let’s tell our success stories through the lens of eternity.

Maybe the founders of MakingChips will start a Christians in Manufacturing podcast as a platform to tell the stories of how our work in manufacturing can build up the Church to make disciples that do the work that truly matters in the end.