“Against All Odds: From There to Here” - An Autobiography by Willy Goellner, Chairman, Goellner Inc.

Rockford, Illinois -- November 30, 2017 -- “Against All Odds: From There to Here” reveals Willy’s story of courage, strength, and determination as a young boy growing up in a close-knit family in Eastern Europe. Influenced by the intrigues of national politics in pre-World War II, this autobiography not only dramatizes Willy’s life and survival at the end of the war, but also the terrible period after the war when he lost most of his family. It shows that with God’s grace, a hopeless situation can be turned around by hard work and an iron will to succeed.

Willy was encouraged by his wife, Irmgard, his daughter, Marika, and other family members to record his life story so that future generations would continue to be inspired by his life’s work. 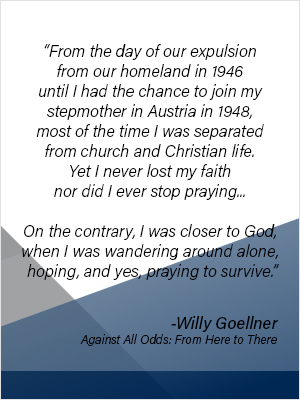 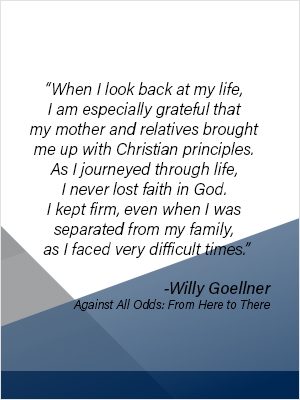 “Against All Odds: From There to Here” is currently available for purchase on Amazon, Barnes & Noble, and the book’s website. Hardcover, soft cover, and ebook versions are all available. In memory of Willy's wife Irmgard, donations can be made on the ALS website: www.alsachicago.org.

About the Author:
Willy Goellner, Chairman, Goellner, Inc. was born on the 5th of April in 1931, in a German-speaking community in Poland. He lost his parents and one sister in the aftermath of the war, and was forced to leave his home, ejected to devastated Germany. In 1948, after two years of struggling to survive, he ended up in Austria where he studied engineering. He was married in 1955 and moved to Germany. With two baby boys, he and his wife immigrated to the USA and eventually Rockford became their home. In 1966, he started his own business, which grew into a worldwide enterprise by 2017 with two plants in the USA, three plants in Europe and joint ventures in China, Germany, England and India.

Download the full .zip file on this press release here