Read this Article in Chinese: 振动危害的最小化和共振与稳定器和减震器

Even with a well-designed carbide saw, blade vibrations will still occur. That is because it is nearly impossible to take into account every possible cause of vibrations. Understanding stabilizing and damping best practices is the key to minimising the inevitable vibrations created during the sawing process. From a structural dynamics standpoint, the main parameters of mass and stiffness are considered to be conservative. This means that they can store, or conserve energy. Damping is the parameter that dissipates energy by converting mechanical energy into heat resulting in the reduction of mechanical energy.

Where can you see damping?

Damping within the structure and the material: For example, the damping in conventionally jointed metal structures is partly due to hysteresis within the metal itself, but primarily due to friction at bolted or riveted joints and the fluid (sometimes just air) that pumps in the joints or even from micro slip.

Discrete units, usually using fluids, such as vehicle suspension dampers and viscoelastic damping layers on panels that are often added to a mechanism or structure to suppress unwanted oscillations.

Damping can be generated by magnetic fields. The damping effect of a conductor moving in a magnetic field is often used in measuring instruments. Moving coils can develop surprisingly large damping forces. One common application is electromagnetic brakes in a gear train.

Ways to Quantify the Damping Effect

In the force-displacement diagram, you can see the energy loss as a mechanical hysteresis because the area underneath the force-displacement diagram is proportional to energy. The load and unload curve don’t match as you would assume for an ideal elastic material, but you get a hysteresis loop which is proportional to the energy loss. Between the stress and the strain, you’ll see a temporal phase shift. The end value of the strain will be reached after a relaxation time, which depends on a time-dependent process taking place in the material. In the same fashion, you can observe a remaining strain after unloading which will reach zero after a longer period. This is due to the reason that atoms will change to an energetically favorable position and withdraw energy. When using ferromagnetic materials the strain will cause an alignment of the magnetic elementary and causes local eddy currents.

The amount of the dissipated energy is driven by the load and velocity, which goes along with amplitude and the frequency of an oscillation. Furthermore, it will also be influenced by the temperature.

By dividing the amount of energy dissipated in a harmonically excited structure by the work applied the specific damping capacity ψ can be calculated.

The Damping ratio D is a dimensionless parameter that describes the amount of damping relative to the critical damping. A critically damped system converges to zero as fast as possible without oscillating.

When the system is excited with the resonance frequency, the amplitude qmax and resonant frequency fo is measured. Then the exciting frequency is changed until the amplitude will be

With the two frequencies f1 and f2, the damping ratio can be calculated. This is the so-called half-power band width method.

Where do you experience damping on a machine tool?

a. Damping of Machine Bases

In big structures, damping forces will dominantly occur where relative motion exists (eg coupling points such as bolt connections and guideways). In order to increase the friction within the machine base, machine builders use core sand in the hollow areas to cause dry friction. In case of rigid body vibrations, the material damping is nearly non-existent.

The material damping of cast iron is better than that of steel, but the welding joints of steel structures and interfaces outweigh this disadvantage.

On the other hand reaction resin concrete has a considerably higher damping factor, but high damping material only has an advantage when the mode dynamically deforms the part and due to lack of stiffness you have a dynamical weak spot.

b. Damping of Joints

The damping of joints and interfaces is about one to two decimal powers bigger than material damping. Main driving factors for this kind of damping are:

Squeeze film dampers use the speed-proportional shear forces in viscous liquids for damping. The damping effect of squeeze film dampers is based on the displacement of liquid between two surfaces, which have a relative motion normal to the surface.

The calculation of the damping due to an oscillating movement in y–direction assumes that the gap is filled completely with oil at any time. Parallel to the track longitudinal direction the oil is displaced or sucked in again. The flow creates a pressure gradient between the track centre and the outer edge.

The integration of the resulting pressure gradient results in the damping force F:

The damping factor d is the force derived by the velocity:

The formula shows that the damping by the oil viscosity depends on highly disproportionate extent on the surface area and the gap height.

The mechanism in the joints is driven by many parameters, which are difficult to collect by measurements. Practical experience shows that the values are subject to a huge variance. The resonance frequencies as demonstrated in the last article can be calculated pretty accurately due to mass and stiffness distribution, whereas the resonance amplitude can show bigger deviations in practice.

How can you measure the damping of a structure

1. The natural frequency without damping is determined by using an FEA package, in our case Solid Works Simulation.

2. A suitable suspension for experimental modal analysis is chosen to keep the effect of the suspension small and to be close to a free boundary condition. The effect should be little for the natural frequency as well as damping. Since you always have to support the load you can just do this approximately, with suspension cords, springs or other means. As a rule of thumb, the natural frequency of the rigid body mode and suspension should be 1:10 of the lowest elastic mode. Helical steel springs usually have a negligible damping factor as well and would be a good suspension. 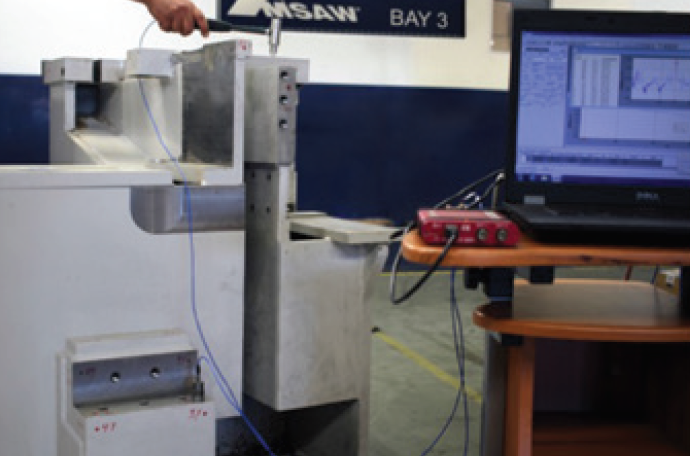 Today more or less effective damping devices are on the market. AME has developed and tested stabilizers and dampers for the last 50 years; we started with a broomstick, and pushed it against the blade, while supported by a machine structure. As silly as it may sound, it proved to be very effective.

Besides designing a saw, using circular carbide or cermet-tipped saw blades with the best damping characteristics, it is important to stabilize the blade to obtain acceptable surface finish and tool life. A saw blade vibrates 90° to its plane and its amplitudes will cut a wider slot if not contained. This was discussed in more detail in our first article, “Effect and Prevention of Vibrations in Carbide Sawing”. This results in larger chip volume, which will increase the sawing torque and could create torsional vibrations in the gearbox. Torsional vibrations are very damaging to the carbide teeth and the gears and must be avoided.

To minimise vibration-related problems, carbide saw manufacturers developed gadgets that they mistakenly called “damping devices”, but in truth, they operate as a stabilizing device. These mechanisms usually consist of hardened plates, which can be adjusted to suit the blade body thickness. These so-called damping devices actually do not dampen the blade, but only stabilize by constraining the vibration amplitudes of the blade by limiting vibration amplitudes. In fact, stationary hardened plates do not absorb any energy caused by vibration. True damping is only accomplished through dissipating the energy produced by the vibrating blade. The friction between the rotating blade and the stationary stabilizing plates will create heat. Generally, the saw blade has to be properly tensioned for stability purposes. Heat within the blade reduces the blade tension and, therefore, must be cooled by air. In order for the air to cool the blade, there must be a small clearance between the stabilizing plates and blade body for air flow, which unfortunately diminishes the effect of stabilization.

Damping requires absorption of the energy created by the forces of the amplitudes of the lateral blade vibrations. This can be done by using vibration-absorbing material for the dampers, using fluids as energy absorbers or other means.

Based on sophistical test results using a Data Acquisition Instrument, laser triangulation sensors and Bentley® probes, we developed and patented a combination stabilizer and damper with the following characteristics:

For damping forces due to material deformation, you need to use continuum mechanic models, which are complex because you have to solve a system of partial differential equation. Usually, there is an interaction between mechanical and thermodynamic processes since the material is heating up and many material properties are functions of the temperature.

Plastic is a good damping material, which indicates that high-frequency vibrations will create much heat. But plastic is also a good thermal insulator, which leads to the problem that heat might destroy the damper material if not properly sized. Simple calculations show that this aspect should not be neglected.

According to Newton’s second law: when you have the same force that is causing vibrations and you increase the mass, the acceleration will go down.

Nowadays with enhanced simulation and measurement equipment, you have a better understanding of natural frequencies and you can avoid problems by the right balance between mass and ingenuity. Smart systems with a lot of modal damping will help too. This will result in a better, more cost-efficient saw.

Download this article as seen in the Tube & Pipe Journal

Read this Article in Chinese: 振动危害的最小化和共振与稳定器和减震器