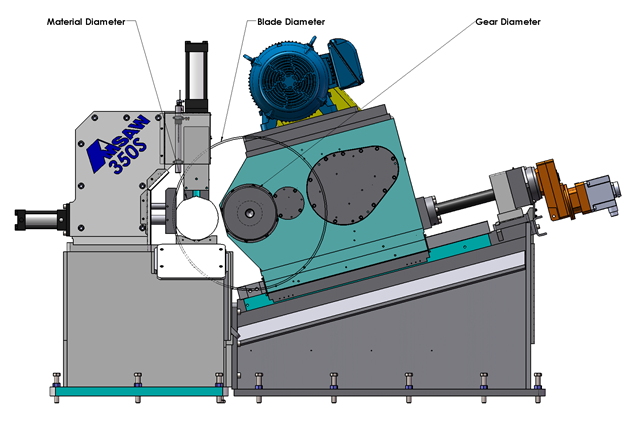 Torsional vibration in carbide saws has the most damaging effect on the tool life of carbide tipped circular saw blades. It is also influenced by the blade diameter, the quality of the saw blades, the spindle gear diameter, the compliance of the gear train in the saw head and feed system, and the stiffness of the fixture and machine structure. The saw blade also must be rigidly clamped to the drive hub to guarantee a stiff transmission of the maximum torque to the saw blade. This can be accomplished by friction or by using both friction and drive pins for positive transmission. A larger diameter drive hub would better stiffen the blade to resist lateral vibrations, but it also would require larger diameter saw blades which would increase the lateral vibrations on the teeth. The gain would only be minimal.

The carbide tipped circular saw blade is just as important for cost efficient sawing. If not properly manufactured and tensioned, it will vibrate laterally and could initiate torsional vibrations. The blade body is torsionally very stiff in the cutting direction, but laterally 90° to the blade plane very weak. The smaller a blade diameter can be, the better it will resist any vibrations because the amplitudes of the lateral vibrations increase proportionally with larger blade diameters. That means, the blade will cut a wider slot, increasing the drive torque and might start torsional vibration if the drive train is overloaded.

Fig. 1 show the relationship of the blade and spindle gear diameters in relation to the billet diameter. It demonstrates that the maximum material diameter [MØ] which can be cut must be in the envelope of blade [BØ] and spindle gear [GØ] diameter. 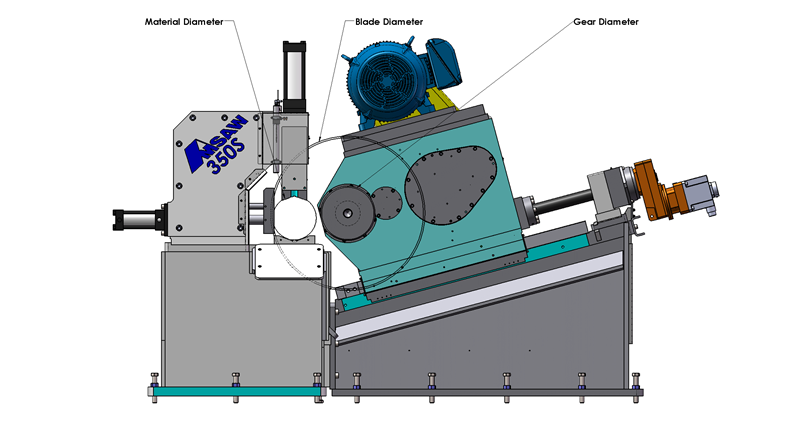 Fig. 1. Blade and spindle gear diameter in relation to the material diameter

The carbide tipped circular saw blade diameter should be as small as possible because:

The spindle gear in contrast must transmit the maximum torque to the blade and needs to be big enough to guarantee sufficient rigidity. Therefore, an experienced design engineer will have to calculate the gear train and establish the proper cost efficient parameters. 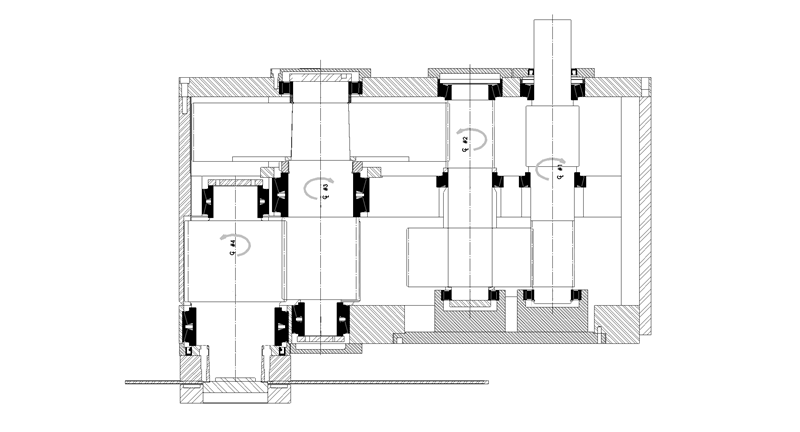 For the largest carbide billet saws five or even six shafts might be needed to obtain the required gear reduction for large saw blades. Each matching gear set needs a minimum of about .002” (0.05mm) backlash to transmit the torque without overheating. The backlash also increases with the number of gear shafts but only with a smaller amount, because the gear backlash of each gear set is reduced by the gear reduction of each set. Maximum diameters of carbide tipped circular saw blades can reach 2 meters (80”) for large carbide billet saws to saw 760mm (30”) diameter max billets. In comparison, the spindle output gear diameter could be as small as 300mm (12”) with a diameter ratio of 2,000/300=6.6.

A 0.05mm (.002”) backlash of the spindle gear match alone will show a 0.33mm (.013”) backlash on the carbide tooth. On a 4-shaft gear box, the total backlash is somewhat higher because the backlash of the other two gear sets must be also added, but is reduced by the gear reduction and therefore is not adding a lot more backlash. In contrast, a typical feed rate of .0.15mm (.006”) per tooth shows the dramatic impact of the backlash. In this example, the total backlash would be over 2 times higher than the feed rate per tooth.

The saw blade and its mounting shaft have relatively little inertia. During the time the total backlash is being removed, the blade tooth momentarily pauses in its rotation while the motor continues at its full speed. When the backlash is eliminated, the blade comes up to speed almost instantly. The speed may momentarily be even higher if the compliance of the gear train is high and the cutting tooth 'springs' forward and impacts the material at full force. When the tooth exits the material, the backlash will open up again and the process repeats until some teeth will stay in the cut. This single tooth exciting frequency measured in Hz could create a maximum impact force of 1,000lbs (4448 N) and become critical when its frequency matches a natural frequency of the machine structure to result in resonance.  As more teeth are engaged, the torque of the gear train will increase but the fluctuating impact force is only caused by one tooth engaging and disengaging the cut. This fluctuation of the wind-up of the gear train could create torsional vibration and is very damaging to the carbide teeth reducing the tool life.

What have we learned?

Download this article as seen in Tube & Pipe Technology

Read this Article in Chinese: 硬质合金锯的扭转振动