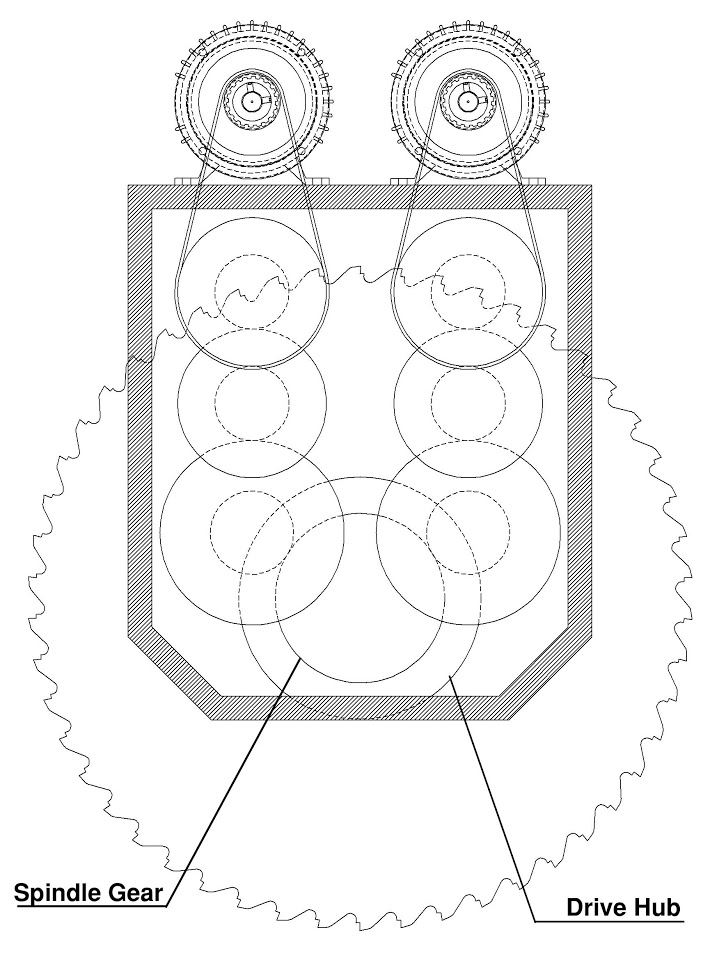 The most damaging effect of the sawing process that directly influences the tool life is the entering and exiting of a carbide blade into and out of the material.

The circular blade enters and exits the material with only one cutting tooth. This means, when the first tooth touches the bar before any cutting begins, the tooth is momentarily halted until the backlash is eliminated and the spring force resulting from the compliance of the gear train is equal to the cutting force. This process is similar to winding a torsion spring.

When the stored energy (the torsional spring windup) of the first tooth is released, the next tooth of the blade “springs” into the cut and “hammers” into the material. This “hammering effect” at the beginning and ending of the saw process is very damaging to the carbide teeth.

The following devices can cost more than the devices mentioned in “Innovative Devices to Maximize a Carbide Saw’s Blade Life.” They are generally used on larger, more sophisticated saw machines where the higher cost can be justified.

A hydraulic disk brake placed at the end of the spindle (Figure 1) helps eliminate both the backlash and part of the windup of the gear train, but the braking energy converts into heat. This heat must be absorbed, which causes a loss in energy. Depending on the used disk and brake lining materials, this arrangement can create stick slip problems and and friction induced vibrations such as NVH seen in car disk brakes. It is generally more acceptable on smaller saws. 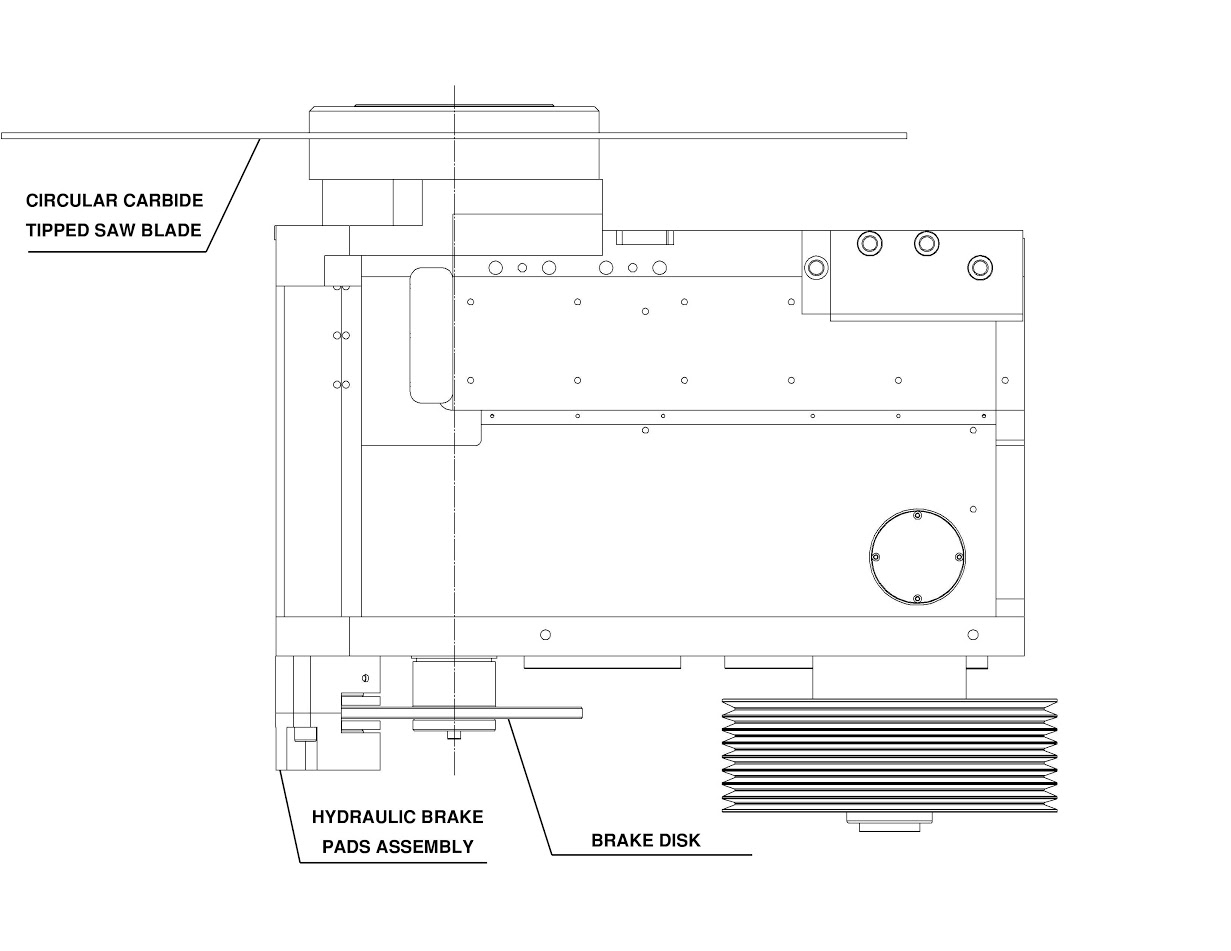 Figure 1 - Head (Gear Box) with disk brake to eliminate backlash and reduce the effect of windup.

A drive motor is connected to the input shaft by a “V” belt or timing belt and drives the main gear train. A secondary, much thinner anti-backlash gear train is connected to a torsional bar, which extends from the blade-drive spindle to a pre-tension mechanism.

This tension mechanism winds up the anti-backlash gear train against the main gear train by friction coupling. The torsion bar, which acts as a torsional spring, eliminates the backlash. This method (Figure 2), developed by Wagner, reduces the backlash of the entire gear train without the stick slip effect. However, it is more expensive. 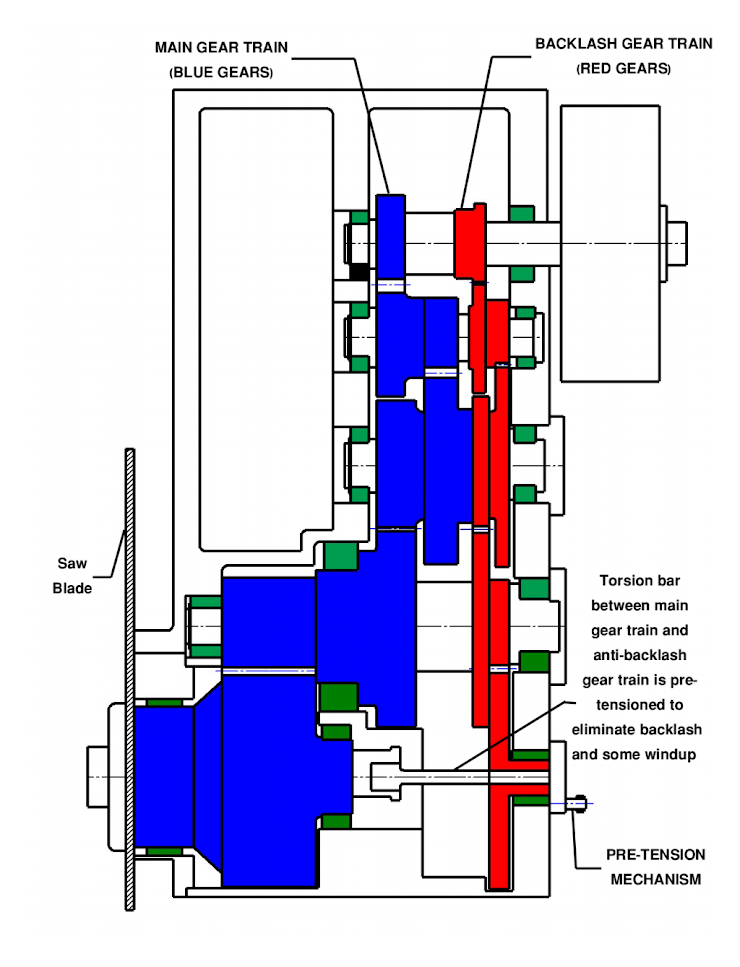 In a two-motor drive, each motor has its own set of gears that individually engage the spindle gear. Both motors drive the circular carbide tipped blade, but one slows down the other motor with a control function that eliminates the backlash and some windup at the start and finish of the cut.

This process can be expensive and is only used for large carbide saws (Figure 3). During most of the cut, except when the blade enters and exits, both motors drive and split the power. This results in smaller modules of the spindle gears. The second gear train is also working as an “inertia damper”.

Figure 3 - At the start and finish of the cut, one motor slows down the other, eliminating the backlash and reducing some effect of windup.

Eddy current brakes, magnetic particle brakes, and hysteresis brakes function similar to  disk brakes, but they are commercially available and applied to smaller carbide saws. On certain types there is no wear on these brakes because the surfaces that have a relative motion do not touch.

The Eddy current brake uses an electromagnetic force between a magnet and a conductive object that moves relative to the magnet. The electrical energy creates heat from the electrical resistance of the conductor and dissipates the kinetic energy. There is no brake torque at zero motion with this principle.

A magnetic powder brake also uses electromagnetic principles. A magnetic flux is formed once the current is applied in the brake, linking the shaft with the attached disk to the housing. If the current is removed then the powder can move free within the cavities allowing the shaft to rotate freely. One advantage is that the system has virtually no stick-slip.

The hysteresis brake uses the hysteresis effect of non-magnetized hysteresis material. The brake consists of a stationary pole structure and a rotor that turns in the air gap between the poles.

If the coil is energized then a magnetic field builds up and magnetizes the rotor. The hysteresis of the rotor causes resistance to the motion and acts as a brake torque. Compared to the Eddy current brake, this device works when the relative motion between rotor and stator is slowed to zero.