When operating a high production circular carbide saw quite a bit of process information from the cut chips on the shop floor can be gathered. One fact which is not intuitive if one has never thought about it is the change of the chip thickness. When measuring the chip thickness with a caliper the value is usually higher than the set chip load per tooth!  Which brings up the question why does that happen and what are the practical implications for circular sawing? 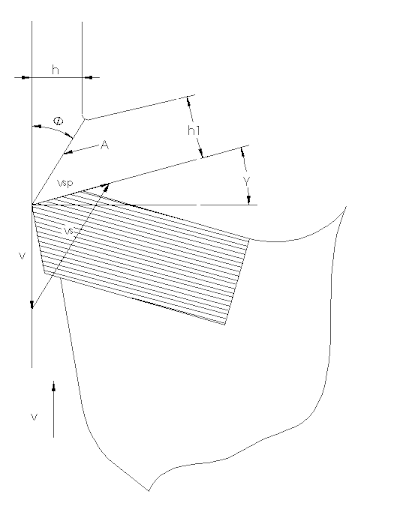 λt….Chip thickness ratio; h1….measured chip thickness; h…. chip feed rate per tooth
The width of the chip will increase too:

λw….chip width ratio; w1….width of chip; w….width of saw blade kerf
The length of the chip will shrink accordingly:

Generally, the chip width ratio is way less compared to the other 2 dimensions. So for further discussion is can be neglected. For designing the tooth geometry, even this small amount of growth has to be considered to avoid jamming of chips in the cutting slot. This is usually solved by the notch grind geometry or triple chip geometry.

The chip volume of an individual chip has to be constant. This concludes when chip thickness will grow as a result and the length will be shortened.

From the velocity plot the relation between the chip thickness ratio, the rake angle and the shear angle can be derived. 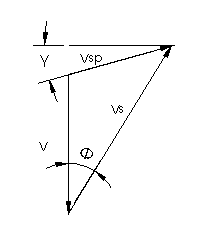 Based on the formula above the shear angle is determined empirically, but it can be calculated through mechanics of plastic deformation

Together with the corresponding shear cross-section

nd the shear strength gathered from material tests the required shear force as well as the direction can be estimated. (see figure 1)

How does this chip thickness ratio apply to your saw blade?

Depending on the material size the gullet size of the saw blade needs to be properly sized in order to avoid filled up gullets. If the gullet is too small for the cutting parameter or has not designed properly shape the gullet will fill up and the chips will put too much pressure on the tooth which will cause premature failure of the teeth. If the the gullet shape is generally acceptable you can increase the cutting speed or reduce feed rate to avoid overfilling the gullet. 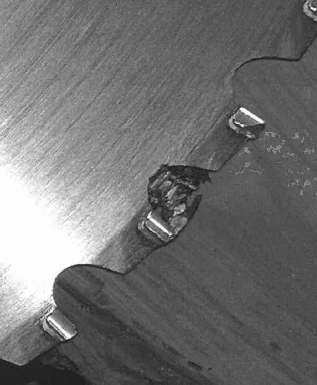 Let’s say the chip thickness ratio for carbon steel is in the range between 2 and 5. The length will shrink by the same factor and this determines the appropriate pitch for the blade. For stainless steel the factor is lower which means that the chip doesn’t grow so much in thickness but on the other hand stays longer too. As a result, a bigger spacing for cutting stainless steel should be used and fewer teeth are engaged in the cut. As an alternative chip breakers are used too.

Generally as a ballpark rule the sawblade is about 3 times bigger than the material diameter. Depending on the drive hub diameter this factor is reduced to minimize tooling cost. Under this situation you will end up with about 5 teeth in the cut for solid steel.

This is only one criterion for selecting number of teeth, besides required cutting power, guidance, vibrations and others.