Having a robust workholding system is just as important as utilizing the best cutting tools, especially for industries machining precise and complex parts such as aerospace. The way the tool and materials are being held is vital to the outcome of the end-product. Without a steady and rigid workholding system, the machining process can be riddled with chatter, less tolerance, and damaging vibration.

Other obstacles of an improper workholding system include:

Ball element clamping components are one solution for aerospace machinists to consider for their workholding clamping needs and here are four reasons why:

Standard dinosaur vises, clamps, and bolt systems allow aerospace machinists to machine down to a certain depth. Once that depth is reached, the machining process is stopped, the part is taken off the fixture and flipped over to machine the rest of the side. Risers or rest buttons can be added to extend the run cycle, but extra components mean extra costs and setup times.

An inverted stud ball element incorporates a screw feature into a ball element. This design raises the workpiece up from the work table, grid plate, or tombstone allowing full-profile machining on all sides of the part without extra fixtures or workholding components. It also enables “one-and-done” setups for continued machine cycles that contribute to the overall ROI.

Standard fixturing components create internal stresses of the workpiece. Excess clamping forces can cause part distortion affecting the quality of the finished product.

A swivel ball element feature has six degrees of rotation in any direction allowing the ball to conform to whatever the surface flatness is of the part for superior holding ability. A stud holds the part in place allowing less internal stresses for bent or angled parts that typically require clamps or vises for machining. The stress-free clamping helps reduce the vibration in the overall setup and eliminates the effects of part distortion during machining.

Traditional clamps and vises can be costly and require multiple setups with multiple components to allow full-sided machining of precise and complex parts. The more a part is handled, the more a machine is down which affects the overall productivity.

The combination of a ball and stud element provides a one-component design that only needs to be set up once. This design allows aerospace machinists to machine parts faster with less risk of damage to the part. Reduced setup times lower overall, minimize waste, and provide faster change outs.

The design of an inverted ball stud element helps aerospace machinists efficiently increase their overall productivity by limiting the number of setups and keeping the spindle moving. 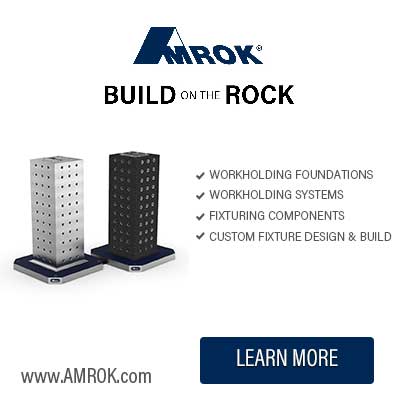