Typically most tombstones in the U.S. are made from cast iron, steel, or aluminum.

Cast iron and steel are heavy, have good damping (vibration reduction) properties, and are less expensive than aluminum. Aluminum is lighter which increases slide acceleration, but it has poor damping properties and is more expensive than cast iron.

There is a weight limit on machine tool tables and pallets (where tombstones are mounted) and heavy cast iron or steel tombstones along with heavy vises and clamps can exceed the weight limit and limit the available acceleration. This is why some choose aluminum, which avoids the weight issue. However, with aluminum, there can be a vibration problem.

Excessive vibration makes tools wear faster, which is expensive; it also reduces the part quality by increasing surface roughness. Epoxy mineral tombstones offer an alternative to cast iron, steel, and aluminum materials. Made of a mixture of crushed stone and an epoxy bonding agent, they weigh less than cast iron and steel with increased vibration damping over aluminum.

Because tombstones support the workpiece during machining, their dynamic response becomes part of the entire system. The goal of this effort was to measure the dynamics individually and then as part of a machine set up. All tests were conducted by Dr. Tony L. Schmitz, a world renowned mechanical engineering professor at the University of Tennessee, Knoxville and Joint Faculty at Oak RIdge National Laboratory, who specializes in machine tool research and manufacturing engineering.

Individual testing set up and procedure

Four tombstones were tested individually: cast iron (hollow), steel (hollow), aluminum (hollow), and epoxy (solid). Each was placed on a thick rubber mat during testing to eliminate boundary condition effects, such as bolt torque and mounted surface flatness. The tombstones were excited by an instrumented hammer and the response was measured using an accelerometer (not shown). See Figure 1. 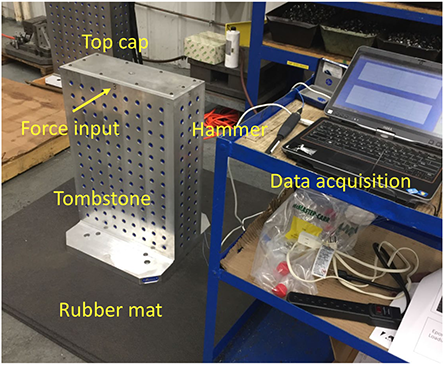 Two tests were completed. First, the free vibration response due to an impulse (hammer strike) was measured. The purpose was to compare the decay rates for the tombstone vibration (or “ringing”) caused by the force input. A quicker decay means vibrations stop sooner.

Second, the frequency response function was measured. This is the ratio of the vibration response to the force in the frequency domain. It enables the natural frequency, stiffness, and damping ratio to be determined for each vibration mode. Collectively these describe how a system vibrates due to a cutting force.

The maximum acceleration was normalized to one for all tests so a direct comparison was possible for the four tombstones. An exponentially decaying trend was then fit to each free vibration response (red lines), where a faster decay rate indicates higher damping. Ultimately, more damping means more stable machining. It is observed that the vibration stops much sooner for the epoxy. This means higher damping. See Figure 2. 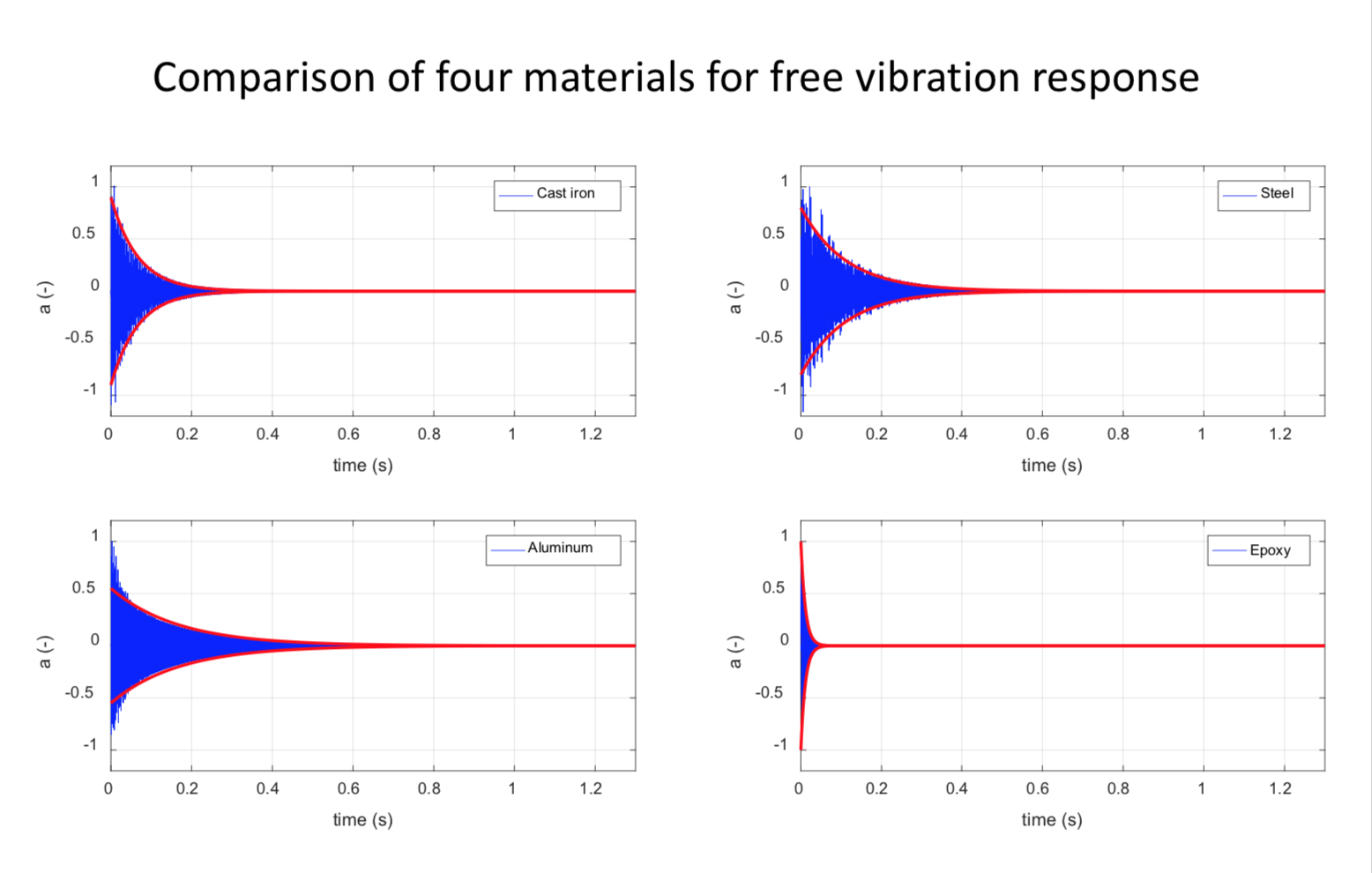 Figure 3: This result demonstrates that the epoxy tombstone offers significantly higher damping than the other materials. For example, the decay rate for the epoxy is 15 times higher than aluminum for the two tombstones tested.

All four tombstones were tested (no top cap) to find the first bending mode and then determine the modal parameters (natural frequency, stiffness, and damping ratio) for this mode. This enables a comparison of both stiffness and damping for each material. 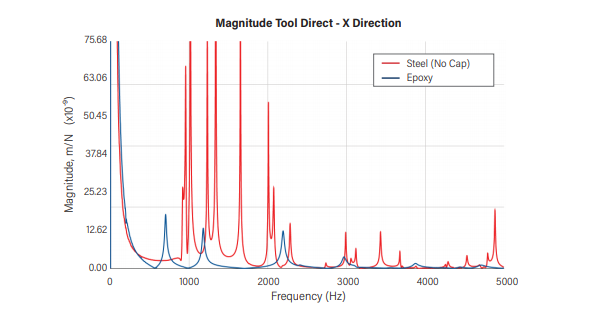 Machine testing set up and procedure

The objective of this testing was to  measure tombstone motion (acceleration) during machining to compare magnitudes. In reference to Newton's second law of motion (often stated as F=ma), the measurement of acceleration is a measurement of the response to a force. In this set of results, more damping provides smaller acceleration.

The work material consisted of low carbon steel.  Down (climb) milling cuts were performed in two locations (front and side) on each  tombstone with a  2” diameter, three insert face mill.  The tombstone motion was measured for each cut using an accelerometer, with  0.002” per tooth feed,  0.1” axial depth of cut, and  1336 rpm spindle speed. See figure 8.

The acceleration signals were measured and the root mean square (RMS) was recorded for each. The four tombstone results were then compared by computing the percent change from the cast iron results (considered the industry standard). The epoxy tombstone performed at a comparable level to the steel and cast iron tombstones, while vibration levels for the aluminum tombstone were much higher than cast iron, steel, and epoxy.

These results show the RMS acceleration values from the steel workpiece machining tests on the front face of the tombstones: cast iron (0.77), steel (0.84), epoxy (0.86), and aluminum (1.15). The figure identifies the percent change from the cast iron baseline. Steel and epoxy vibration levels are approximately 10% higher, while aluminum is nearly 50% higher. 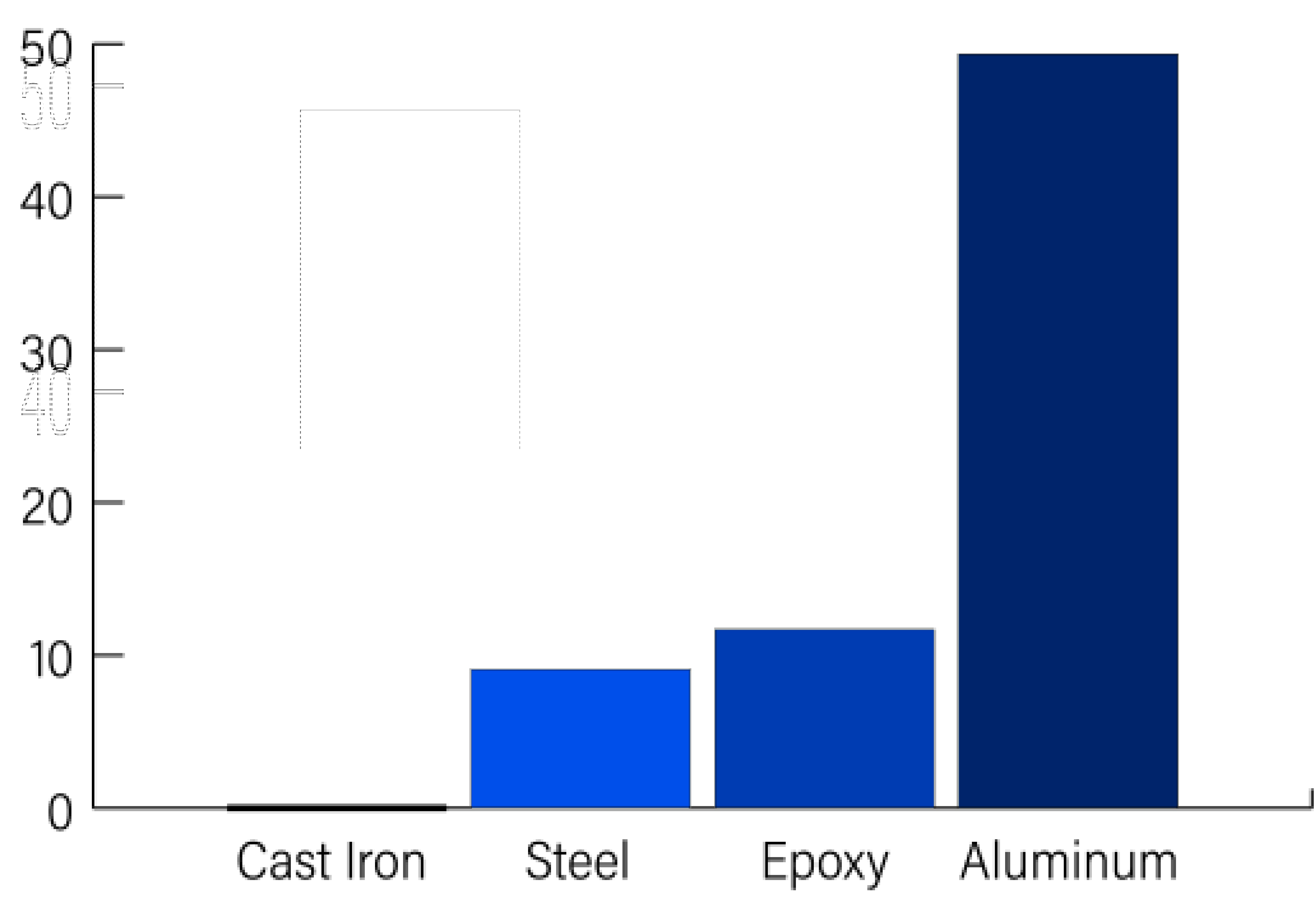 These results show the RMS acceleration values from the steel workpiece machining tests on the side face of the tombstones: cast iron (1.91), steel (1.94), epoxy (1.82), and aluminum (3.05). The figures again display the percent change from cast iron. In this case, the epoxy tombstone outperformed all others, while aluminum resulted in a 60% vibration level increase over cast iron. 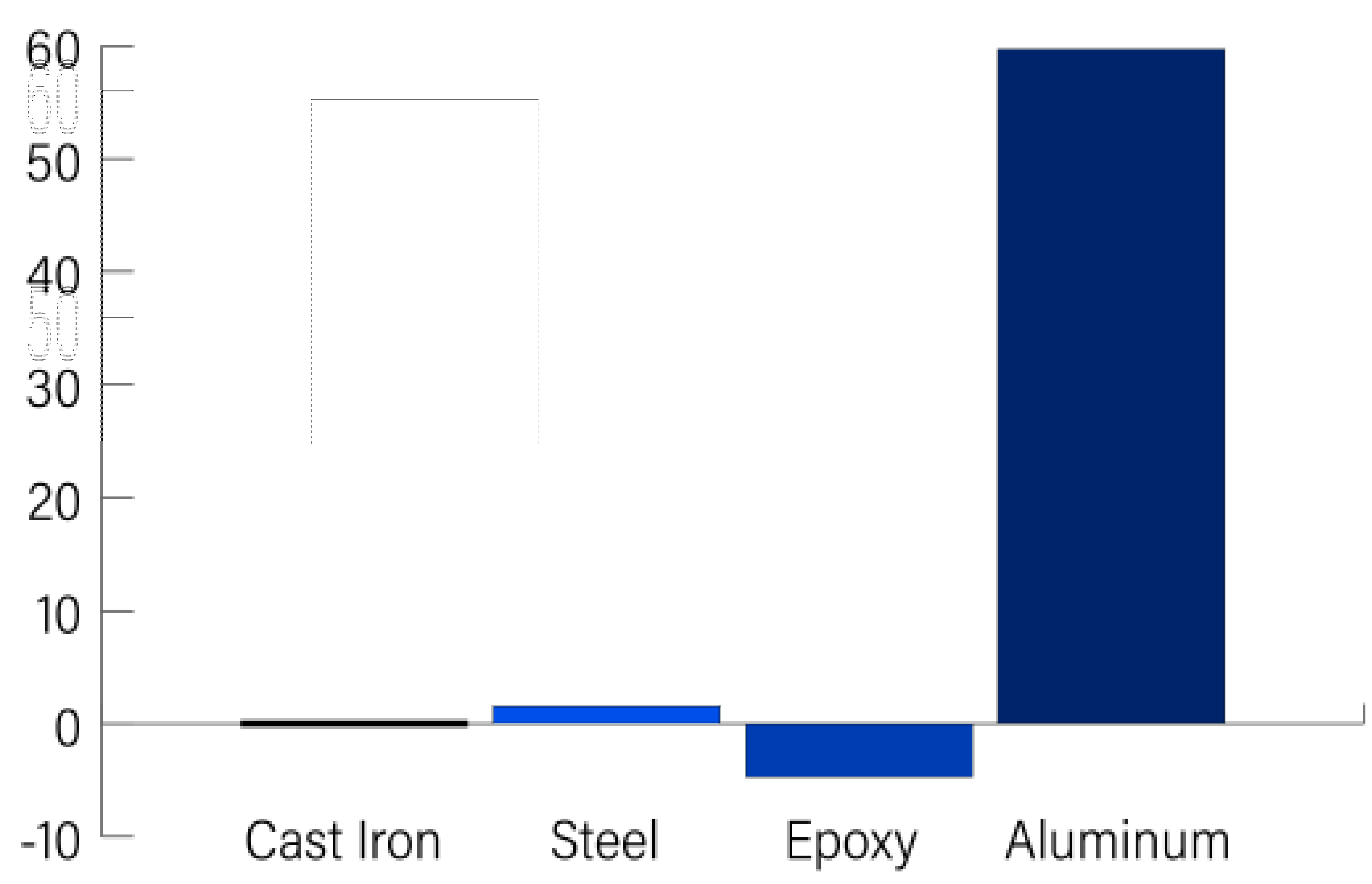 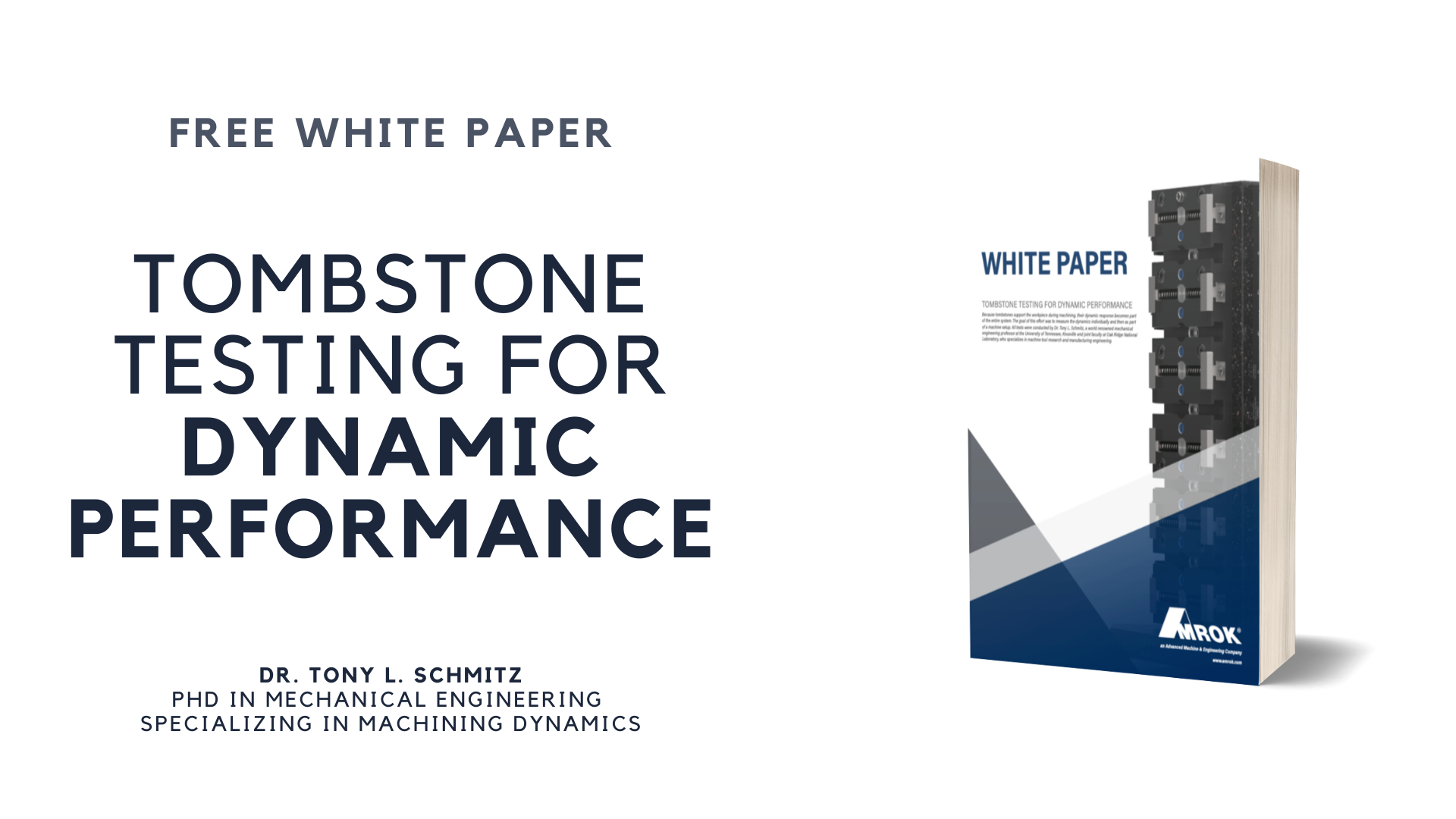