The challenge every manufacturer faces is how to get more done in less time—removing the waste in a process is the essence of lean manufacturing. One approach to eliminating unnecessary setup time is to integrate trunnion systems into a vertical milling machine (VMC) to minimize part handling. This modular 4th-axis fixture video shows a versatile approach to VMC workholding.

Martin’s trunnion tables are paired with Triag modular workholding for flexibility and efficiency in a fixturing bundle designed by  Advanced Machine & Engineering.

The animation shows a CNC trunnion table integrated into a vertical machining center (VMC) setup that enables 4th-axis machining. This transition from a 3-axis to a full 4th-axis workholding setup has instantly allowed for more machining processes to be combined in a single operation—more machining, less handling and downtime.

The trunnion table included in the example shows a 9x23 trunnion table which is able to better accommodate double-station vises than it’s smaller counterparts.

Investment in workholding for your machining centers is based on a number of factors—precision, flexibility, universality, etc.—oftentimes resulting in a significant up-front investment that will, ideally, carry your team past the competition in the long-run. This 4th axis trunnion setup won’t cost as much as a new horizontal milling machine, but it will expand the possibilities on your VMC — the perfect middle ground. 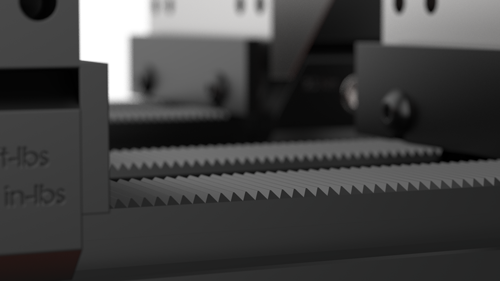 The example above shows a modular workholding approach, using a precision-installed base rail—this system design allows for the rail to be easily repositioned anywhere on a standard 2” grid. Each rail is designed with 2 mm serrated teeth for clamping jaw units to sit on—from there the jaws themselves can be expanded to accommodate a more precise clamping position. The typical stroke of these clamping jaws is 5 mm, so by relocating the clamping modules along the rail in 2 mm increments, this system is able to cover the entire range and hold workpieces of varying sizes. 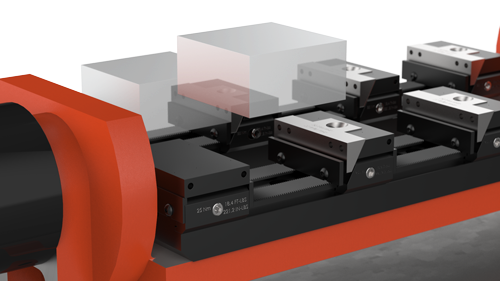 Other modular rail systems for workholding operate off of a t-slot design—this means, in order to remove one workpiece or clamping component in the center, the entire setup is disrupted. With the above modular system, this complication can be avoided by loosening the side screw that fixes the clamping module to the rail so the module can be removed from the rail without disrupting the other modules.

The simplicity of this system is not just beneficial to general part clamping, but the changeover between operations is also quick and efficient with a long line of supplementary workholding components. Everything from collets to magnets to vacuum attachments can be quickly added or removed from the standard base rail to accommodate specific applications.