A machine tool is a system of springs

In a previous article, we urged you to start thinking of your machine tools as a collection of springs. These springs are connected together in a chain with the tool at one end and the workpiece at the other. When we add a workholding system, we are adding another spring to the chain; and it needs to be stiff enough that the machine’s behavior when cutting doesn’t change.

A spring is a mechanical element that deflects when a load is applied to it and recovers its original shape when the load is removed. The amount a spring deflects under a given load is called its stiffness, and is designated as k.  The amount,

, a spring deflects under a load is given by the formula below.  For example, if a spring has a stiffness of 20,000 lbs/in, that means that a force of 20,000 lbs will cause it to deflect one inch.

It can be difficult to think of massive cast iron machine columns and beds as springs because the deflections they experience cannot be perceived by human senses alone. Nevertheless, it's a useful thought exercise! Remember, there are no absolutely rigid bodies in the world. Even the most massive structural component deflects under the smallest loads.

The important question isn’t whether the elements in a machine tool deflect under the cutting forces, but whether the amount is enough to negatively impact the machining process. Stiffness is an important aspect of a machine tool, and plays a huge role in how aggressively it can cut material and the dimensional and surface quality of the resulting part. Machine tool designers work hard to ensure the stiffness of all the elements in the chain running from the tool tip to the workpiece utilizes the full power of the spindle.

It wouldn’t make sense to put a Corvette V-8 in a go-kart, or a lawnmower engine in a Ferrari. The engines used in both are compatible with the rest of the drivetrain and vehicle frame, to use full engine power without going overboard. In a similar way, machine tool structures are designed to be compatible with the spindle motor used in the machine. The structure must be stiff enough so that the full power of the spindle can be used, and when we add a workholding system, it needs to be stiff enough so that we don’t degrade the machine’s performance.

The importance of bending 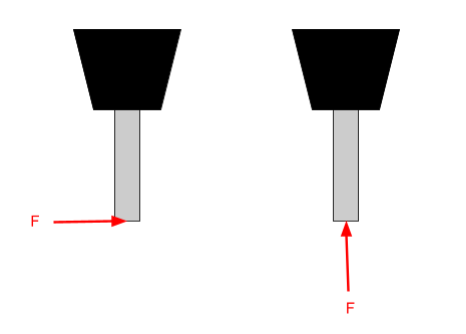 Of all the ways workholding system components can deform, bending is almost always the most flexible. For instance, let’s think about a steel-bodied milling cutter that is 1 inch in diameter and 4 inches long. If we assume that it is connected to a rigid tool holder and spindle system, then the tool acts as a cantilever beam when the cutting force is perpendicular to the tool axis. This causes the tool to deflect to the right, and its bending stiffness is 69,029 lb/in. On the other hand, if the cutting force acts along the axis of the tool and causes the tool to shorten, the axial stiffness is 5,890,500 lb/in. That’s 85 times higher than the bending stiffness!

The same force will cause deflections that are 85 times higher when applied perpendicular to the tool axis compared to along it. This predominance of bending is always the case unless the length of the structural member starts to approach its thickness. For this post, we will only consider bending when analyzing workholding elements.

Usually, the tombstone is the element of the workholding system that is most likely to undergo bending. In the figure below we see a typical rectangular tombstone with height, h, width, w, and thickness, t. It is mounted on a rigid machine worktable, so the tombstone acts like a cantilever beam when a cutting force, F, is applied.

The formula for stiffness of a rectangular cantilever beam with the load applied in the thickness, t, direction is:

In this formula, E is a material property known as the modulus of elasticity. For steel and aluminum, the value of E is the same regardless of alloy or heat-treat. For cast iron, there is a variance between different types, but for most tombstones, you can use the value below.

If the tombstone pictured above is made of steel and has dimensions of h = 24 in, w = 12 in, and t = 6in, its stiffness will be k = 1,406,250 lb/in. If the cutting force is F = 1000 lbs, the top of the tombstone will deflect by 0.0007 inches. If the tombstone was made of aluminum instead of steel, the stiffness would be reduced by two-thirds, and it would deflect 0.0021 inches. This could lead to missed tolerances on the machined part.

Second, we can see that where the workpiece is placed on the tombstone can have a dramatic effect on the stiffness.  If the workpiece is placed half-way up the tombstone instead of at the top, the effective height of the tombstone is now just 12 inches, since the portion above the part isn’t being subjected to any load. Now the stiffness at the point where the part sits is 8 times higher than if it were placed at the top, and the 1000 pound cutting force will only cause a deflection of 0.00009 inches in the steel tombstone, and 0.00027 inches in the aluminum tombstone.

What about hollow or non-rectangular tombstones?

Of course, tombstones are not all made in convenient rectangular shapes, and for those outliers, this formula does not work. While it is possible for a trained engineer to figure out the stiffness for this new shape, you can easily get a reasonable estimate by simply figuring out what the largest rectangular shape is that would fit inside the odd-shaped tombstone, and calculating that stiffness. The real tombstone will certainly be stiffer than this value, but if the value you calculate is satisfactory, then the real tombstone should function well.

How does the tombstone effect overall stiffness?

As previously mentioned, the machine tool structure that connects the tool point to the workpiece through the tool holder, spindle, machine axes, columns, guideways, beds, and more, can be thought of as essentially a large spring. What happens when we add another spring, the tombstone, onto the end of that chain? It turns out that the addition of even what seems to be a very stiff tombstone can have plenty of negative effects.

Fortunately, for most machine tools the most flexible element is the combination of the cutting tool, the tool holder system, and the spindle shaft. Machine tool designers generally try to make the composite stiffness of the rest of the structure at least 10 times the stiffness of the tool/holder/spindle combination. If we outfit our tombstones so that they are also 10 to 20 times that stiffness, then we should not compromise the cutting performance of the machine.

The deflection you calculate for your tombstone using the formula above is what would happen if the force were applied slowly and then held constant. Unfortunately, as we saw in article 4, cutting forces are not static, but vary periodically and cause vibrations.  For virtually all cases of tombstones, the vibrational deflections, or amplitudes, will be larger than for the static load case; and sometimes much larger.

Stiffness values appear to be very high, easily reaching above one million pounds per inch, so it’s tempting to think of them as perfectly rigid bodies. However, the magnitude of the cutting forces can be large enough to make the amount of deflection a significant fraction of the tolerances. This could easily cause quality and surface finish problems.

Tombstone material matter is also important. You can expect an aluminum tombstone to have about one-third the stiffness of a steel tombstone of the same dimensions. Some dimensions, like height and thickness, have large effects on the stiffness, while the width does not. Overall, a good target for tombstone stiffness is at least 10 to 20 times the stiffness of the tool/holder/spindle system, which is almost always the most flexible part of a machine tool.