In article 5, we learned how to estimate the deflection a tombstone would experience, based on the expected maximum value of the cutting force. However, the deflections we calculated assumed a constant load, which makes them the static deflections of the system. The cutting force is never constant, but varies at the tooth passing frequency. For example, if we have a 4-fluted cutter rotating at 3000 rpm, or 50 revolutions per second, a new tooth will engage the workpiece 200 times per second, or at 200 Hertz (Hz). This periodic force will cause all mechanical systems to vibrate. Let’s see how our tombstone will respond.

When a mechanical system is acted on by a periodic force, the system will vibrate at the same frequency as the applied force. This is known as a forced vibration, and is different from a free vibration where a brief input force is applied and then the system is left to vibrate on its own, like ringing a bell. In free vibrations, the system vibrates at its natural, or resonant, frequency; and the vibrations eventually die out because all real structures have damping. Damping causes the amplitude of the vibrations to decrease over time. The higher the damping, the faster the vibrations die out.

So, in the example above, the tombstone will vibrate at the forcing, or tooth-passing, frequency of 200 Hz. The amplitude of vibration, or the maximum deflection during a single cycle, is dependent on the ratio of the tooth-passing frequency to the natural frequency. The figure below shows how the system will respond. 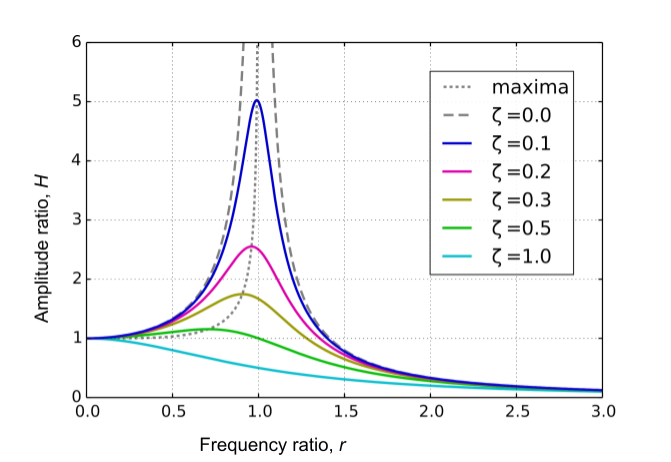 In this graph, the vertical axis is H, the ratio of the amplitude of the vibration to the static deflection caused by the maximum cutting force (if it were constant). The horizontal axis is r, the ratio of the tooth passing frequency to the natural frequency of the system. If the force is constant, then the frequency ratio is zero, and the amplitude ratio is 1. This means that the system undergoes its static deflection.

On the other hand, if the forcing frequency is equal to the natural frequency of the system, or r = 1, the amplitude of vibration can be very much larger than the static deflection. The colored lines show how the amplitude varies for different values of the damping ratio,

, which is normally designated by the lower-case Greek letter, zeta. For virtually all workholding systems, and machine tool components, the damping ratio is quite small. Typically, for all-metal tombstones, it will be less than

In article 5, we calculated the static stiffness for a solid steel tombstone with dimensions of 24x12x6 inches, and found that for a static force of 1000 lbs, the tombstone would deflect by 0.0007 inches. If that tombstone has a damping ratio of

= 0.2, and the tooth passing frequency equals the natural frequency, then the vibration amplitude for this cutting force level will be approximately 0.0018 inches. Since the amplitude is measured from the undeflected position to the max deflection, the total motion will be twice as much, i.e. the tombstone surface will move from +0.0018 inches to -0.0018 inches, for a total excursion of 0.0036 inches. Obviously, this starts to be concerning as it is likely a significant fraction of the tolerances you would like to hold, and is many, many times higher than the peak-to-valley difference in common surface finish specs. Fortunately, just because the workpiece is moving this much does not mean that the surface roughness will also be bad.

We can see from the above that the maximum amplitude of vibrations in response to a given cutting force is primarily determined by two characteristics of the tombstone, the static stiffness, k, and the damping ratio,

. The product of these two, k

What about surface roughness from the vibrations?

When we calculate the potential amplitude of vibrations for realistic cutting forces and tombstone dimensions and materials, we will often find values that are much larger than the surface finish specification. This seems like it would lead to unacceptable parts! Fortunately, one characteristic of forced vibrations is on our side in this instance. To understand that, we need to look more closely at how the surface of a milled workpiece is actually created. In the figure below, we see an end view of a milling cutter as it progresses through a part from left to right. The feed-per-tooth is greatly exaggerated here so that we can see how the individual teeth create the newly milled surface. For the moment we will assume that the tool feeds smoothly to the right and the tombstone to which the part is attached is perfectly rigid and therefore experiences no vibrations. 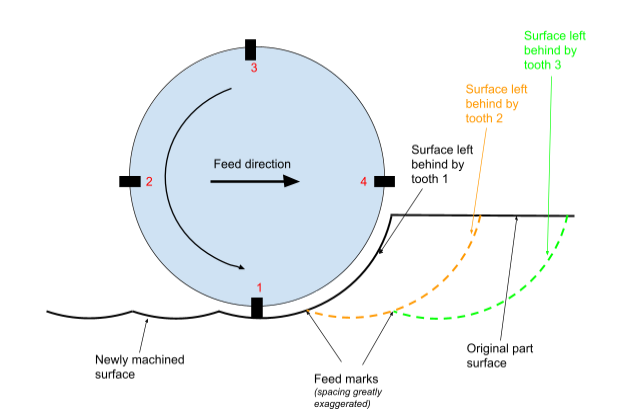 The blue, orange, and light blue curved lines show the surface left behind as each tooth successively engages the workpiece and removes a chip. We can see that most of the curved surface left behind by one tooth is removed by the next one. What remains are small scallops with shallow peaks separated by the feed-per-tooth distance, commonly referred to as “feed marks”. For normal machining parameters, the height of the peaks is quite small. For instance, if the cutter diameter is 1 inch, and the feed-per-tooth is 0.01 inches, the scallop height will be about 25 millionths of an inch and the peaks will be separated by 0.01 inches.

Now, let’s assume the part surface, which is attached to the tombstone, is vibrating vertically up and down by several thousandths of an inch as the tool moves to the right. This seems like it would create a rough surface, but we are saved by a vital characteristic of forced vibrations, namely that the deflection has a constant phase relationship to the force. This means that each time a tooth rotates to a point where it is just beginning to engage the surface, the position of tooth 1 in the figure above, the tombstone and part will always be in the same vertical location of the vibration. Exactly where it is in the vibration depends on the frequency ratio, r, but fortunately, it will be at the same vertical position for every tooth as it reaches the point where it is creating the portion of the milled surface that is left behind and not removed by a subsequent tooth. Note that as the spindle speed changes, the vibrational position where the new surface is created will change slightly. However, this is normally a small effect unless one is machining with a tooth-passing frequency near the resonant frequency. In that instance, small changes in the spindle speed can lead to significant changes in the location of the new machined surface. Therefore it is generally best to avoid spindle speeds that are near the resonant frequency of the tombstone.

This fortunate situation will be true so long as the cut remains stable. If the cut is too aggressive and begins to chatter, the vibrations will no longer be at the tooth passing frequency. This means that each tooth will create its part of the machined surface at a different vertical position, leading to the horrible surface finish that is characteristic of surfaces machined with chatter.

How stiff does the tombstone need to be?

For most well-designed machining centers, the tool/holder/spindle-shaft system is the most flexible element by a wide margin. The reason for this is that the bearings that support the spindle shaft cannot be too large in diameter and still able to spin at the speeds normally expected in modern machine tool spindles. Therefore, the diameter of the spindle shaft is limited by the bearings that support it, and the shaft diameter is the dominant factor in determining the bending stiffness of the system.

Ideally, you would directly measure the dynamic stiffness of the spindle/holder on your machine. The best way to do this is with a so-called “tap test” that utilizes an instrumented hammer to tap the spindle nose and measure the force versus time of the impact. An accelerometer attached to the opposite side of the spindle nose measures the resulting vibrations, and appropriate software processes the signals to provide a “frequency response function” similar to the graph in the first figure, and extract the static stiffness and damping ratio values. Unfortunately, most shops don’t have this equipment. However, there are services you can hire to visit your shop and measure your machine spindles. At the same time, they can measure the stiffness and damping of any tombstones or other workholding devices you may have. The tests are quick to set up and run, so in most instances they will be able to measure all of the machines of interest in a single visit.

If it isn’t feasible to measure the dynamic properties of the spindle on your machine, you will have to fall back on experience. Generally speaking, the larger and more powerful the spindle motor, the stiffer it will be. However, for typical machining centers with spindles rated up to around 40 HP, the dynamic stiffness of the spindle/holder system will rarely exceed 50,000 lb/in. In many cases, it will be much less, especially if long, slender end mills are used.

In this article, we learned that flexible elements, like tombstones, will vibrate when subjected to the periodic force pattern that is characteristic of milling. The amplitude of the vibration will depend on the combined stiffness and damping of the tombstone, and also on the spindle speed and resulting tooth passing frequency of the machining operation.

The largest vibrations will occur when the tooth-passing frequency is near the natural frequency of the tombstone, and so it is a good idea to select your spindle speeds to avoid the primary resonant frequency of the tombstone. Fortunately, this is not normally a problem since most large tombstones will have their first resonance at somewhere around 1200 to 1600 Hz. For a 4-fluted cutter, this translates to a spindle speed of 300 to 400 revolutions per second, or 18,000 to 24,000 rpm. We learned that the amplitude of the vibrations caused by the cutting forces may seem large, but so long as the cut is stable, this should not lead to significant degradation of the surface finish.