The one component that is common to all workholding systems is a method for clamping the part(s).  As we discussed earlier, machining involves forces that can be significantly high, and a clamping system is needed to restrain the workpiece from moving.  A wide variety of clamping systems exist, and it can be confusing to choose which one is best for your needs.  In this article we will look at the various types of clamping systems and evaluate their strengths and weaknesses.

All clamping systems must possess means to accomplish the following tasks:

In this article, we will examine the ways in which commercially available clamping systems accomplish the tasks above.  The criteria below may be used to evaluate the various types of clamping systems.

A majority of clamping systems use friction to restrain the workpiece in at least some directions.  It is worthwhile to look more closely into some common situations to determine just how high the clamping forces need to be.  The figure below illustrates a workpiece clamped along its lower edges while being machined along its top surface. Cutting forces are commonly hundreds of pounds, and for heavy cuts performed by a powerful spindle they can be thousands of pounds.  If we assume the cutting force is 500 lbs, and the workpiece is 4 inches tall and 2 inches wide, the minimum clamping force required is 5000 lbs.

There are certainly cases where it is difficult to achieve sufficient clamping force to restrain the part by friction alone.  If it is acceptable to mar the surface of the workpiece, systems exist that are designed to dig into the surface with hardened sharp points or edges; thereby greatly increasing the effective “friction” force.  Examples include the Pitbull Clamp by Mitee-bite Products LLC, which is available in both blunt and knife-edge versions.  According to the manufacturer, “...the knife edge clamps bite into the material for more aggressive machining, while the blunt edge is less likely to mark the workpiece.”

Triag Inc. also offers clamping surfaces that are designed to bite into the workpiece to achieve higher holding forces. 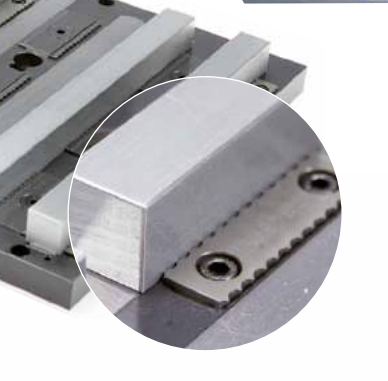 Another approach to minimizing reliance on friction to restrain parts is to use specially prepared workpiece features that mate with features on the clamp to cause mechanical interference to prevent motion.  For example, 5th Axis Inc. offers a line of dovetail clamps that require a dovetail feature to be machined on the bottom of the workpiece.  When mated with their clamping components, mechanical interference in the dovetail prevents the part from being pulled up out of the clamp.  While this does require an additional machining step, it enables the use of lower clamping forces resulting in less part distortion.  It also creates a very low-profile clamping zone which may result in less material waste on the workpiece, and enhanced access for 5-sided machining. 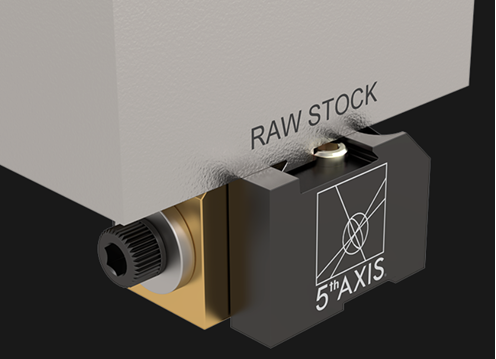 The speed with which parts can be loaded and unloaded is highly dependent on the method by which the clamping force is applied and released.  By far the most common manual method is a screw-operated system, where the operator applies a wrench or other tool to the clamp to create and release the clamping force.  Ideally, these manual systems should be operable using one-hand only, so that the operator’s other hand can grasp the part and position it ready for clamping.   Where possible, it can save time if multiple parts can be clamped or released with one actuation.  For example, Mitee-Bite Inc. makes a line of Uniforce® clamps that work by forcing a wedge-shaped element in a u-shaped channel, thus elastically expanding the sides and creating a clamping force on two parts simultaneously. 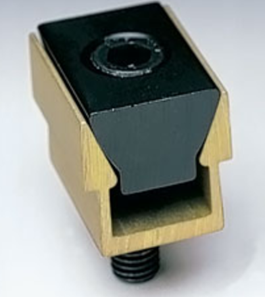 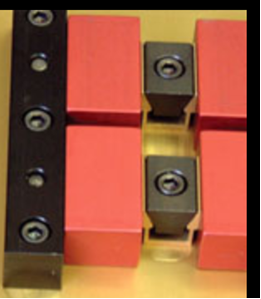 If production volumes make it economically feasible, various forms of automated, or semi-automated clamping actuation are available.  The most common are hydraulic and pneumatic systems, where actuators powered by these energy sources replace the manually operated screw actuation.  Hydraulic systems are generally more complex and expensive, but offer much higher clamping forces since they typically operate at several thousand psi; whereas pneumatic systems using shop air are typically limited to around 150 psi, and thus may require some sort of mechanical force amplification system to achieve the desired clamping force.

Clamping systems are also available that use magnetic attraction or vacuum to hold the part against a typically planar surface.  Obviously magnetic systems are limited to use with ferro-magnetic materials, but they can be designed to exert high clamping forces.  These systems are often made so that rare-earth, permanent magnets hold the workpiece during machining so no power is required.  To release the part, a brief pulse of electrical power is supplied to electromagnets that are arranged to counteract the magnetic attraction of the permanent magnets.  Schunk Inc. makes a wide variety of magnet chucks designed for milling applications. 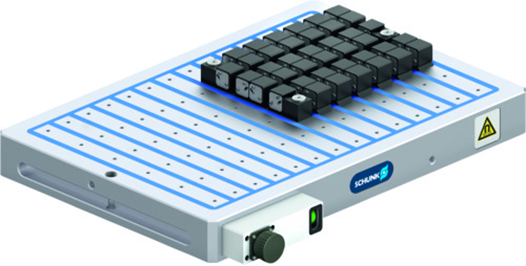 Vacuum clamps require large surface areas of the workpiece to be in close contact with the vacuum plate, since the vacuum is limited to atmospheric pressure, or about 14.7 psi.  For example, a 4” X 4” workpiece will generate in excess of 200 lbs of suction force, which may not be sufficient for heavy machining.  Much will depend on the friction between the workpiece and the surface of the vacuum chuck. A Schunk vacuum chuck is pictured below.

Except in very high production environments, most shop owners and managers will want to invest in clamping systems that are capable of handling the widest variety of workpiece shapes and sizes.  The simplest way to accomplish this is with a traditional single-action vise as illustrated below, which uses one fixed jaw and one movable jaw actuated by a long screw.  While this type of vise can accommodate a wide range of part sizes, it is wasteful of space in the machine and can take a long time to adjust from narrow to wide parts. 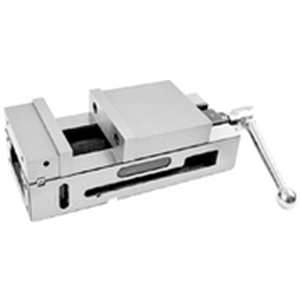 To address these shortcomings, many manufacturers offer modular systems where the fixed and movable jaws are easily repositioned along serrated tracks.  The pitch of the serrations defines the lower limit of adjustability of positioning the jaws, with typical values in the range of 0.1 inches.  An advantage of this is that the movable jaw only needs to travel a bit more than the pitch of the serrations, enabling a wider variety of methods to actuate the clamping force.  A Schunk system is shown below, which uses a wedge principle to actuate the movable jaw.  In this system, the reverse side of the movable jaw acts as a fixed jaw for the next clamp in the line. 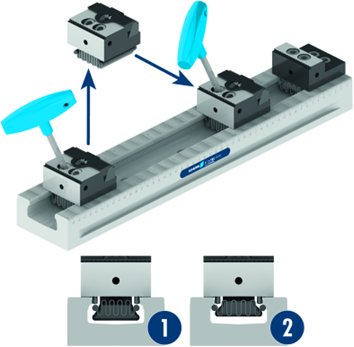 Locating and aligning the workpiece

It is highly desirable that the clamping system align each workpiece with the machine’s axes, and locate it at a known point in the machine’s workspace.  The most common way to achieve this is to have a fixed jaw against which each workpiece is clamped.  While it is theoretically possible to use one fixed jaw and multiple floating jaws to clamp multiple workpieces with one clamping device, this is generally not a good idea.  In the schematic figure below we see such a system that uses one clamping device to clamp four workpieces.  When the movable jaw is tightened, the same clamping force is applied to each workpiece.  While this seems like it would save a lot of time in loading and unloading, the problem is that unless the dimensions of the workpieces are tightly controlled, the total variation in size becomes the possible difference in position of the workpiece nearest the movable.  This may make it difficult to hold tolerances in the workpieces furthest from the fixed jaw.  Therefore, in general one should select clamping systems where each workpiece is clamped against a fixed surface to make sure the machine operator doesn’t have to touch off each part before machining can begin. 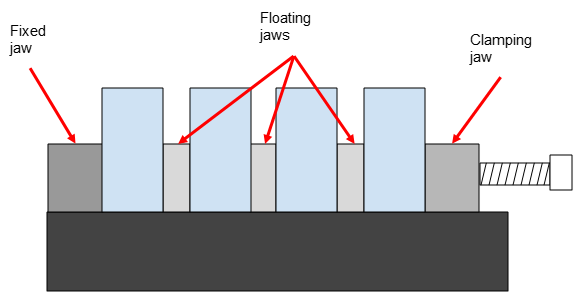 An alternative to fixed jaw clamping systems is useful when the raw workpieces in a production run vary considerably in size, as may occur with castings or forgings.  For these, a self-centering vise may provide better part location.  In a self-centering vise, both jaws are movable and are designed to move symmetrically about a fixed center point between the jaws.  The principle method by which self-centering vises maintain symmetrical motion is through the use of leadscrews with right and left hand threads, similar to a turnbuckle.  The figure below shows a self-centering vise from AME.  This vise also utilizes a dovetail gripper as described above, and is designed to accommodate mounting on precision grid plates with a 2-inch grid of locating holes. 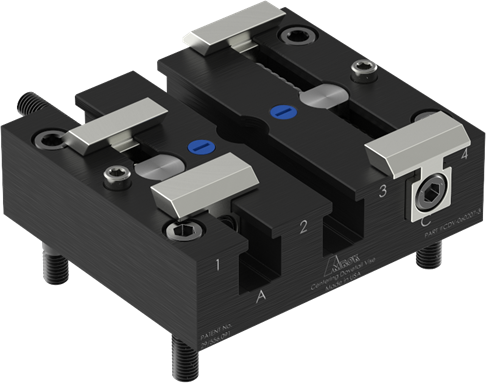 There are four principal mechanisms by which manual clamping devices generate the clamping force, screws, wedges, cams, and levers.  If this sounds like the lesson on simple machines from your grade-school science class, it should.  All of these well-known mechanisms are found in workholding clamping systems. Clamping devices are used on all workholding systems.  They come in a wide variety of types and with a number of different working principles.  In this article we have reviewed the common functions of clamping devices, and examined the methods used to achieve these functions found in commercially available devices.