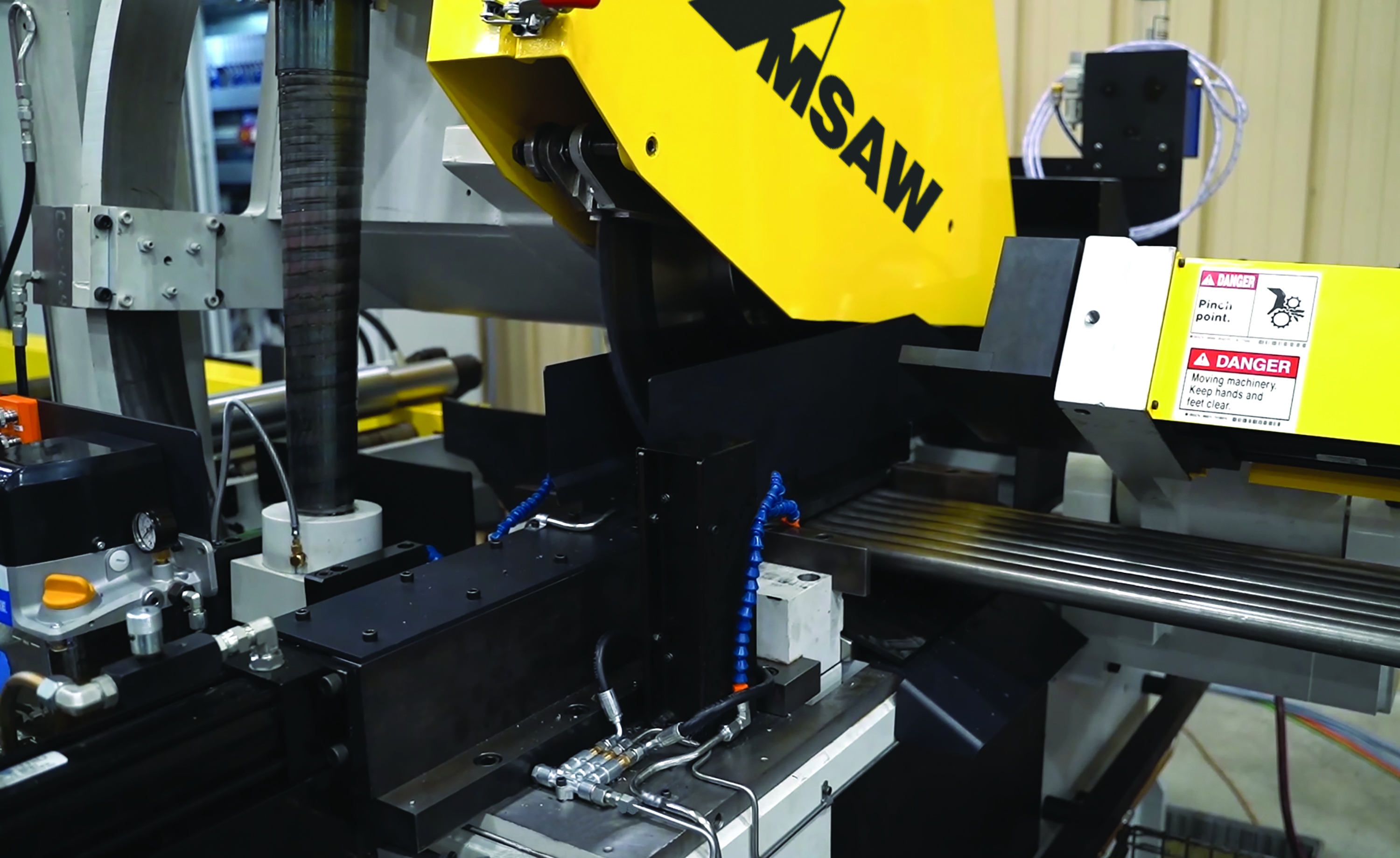 Layer Saws are designed to improve the saw productivity tremendously by cutting several bars with one cut. Because of the width of the cut and the blade having to pass through several bars, a high torque on the spindle is required and the machine must be very rigid for driving large diameter circular blades.

Most tube or bar sizes are between 25mm and 350mm.The wall thickness is between 2mm - 50mm. Layer Saws are mostly used for cutting continuous cast tubing or bars in steel mills, since the length of the cut tubing can be between 5m – 100m. Such Layer Saw systems often have two saws in line. One is traveling with the same speed of the continuous cast material and cuts while traveling. In these cases, the tubes are usually well above room temperature and with contactless temperature sensors the thermal expansion is compensated to achieve the proper length in a cooled state.

The most powerful Layer Saws are vertical slide saws. These machines are essentially horizontal, box way or heavy linear way machines in a vertical orientation. Since vertical saws are tall, the base must have an especially stiff design to reduce vibrations for an acceptable tool life. Naturally, such bases are heavier and more expensive. The bars are normally spread out in layers on large tables after the cooling beds and travels in layers to the saw blade. Due to the weight of the gearbox a hydraulic cylinder, in addition to the ball screw, is usually used to counter-balance the gearbox. 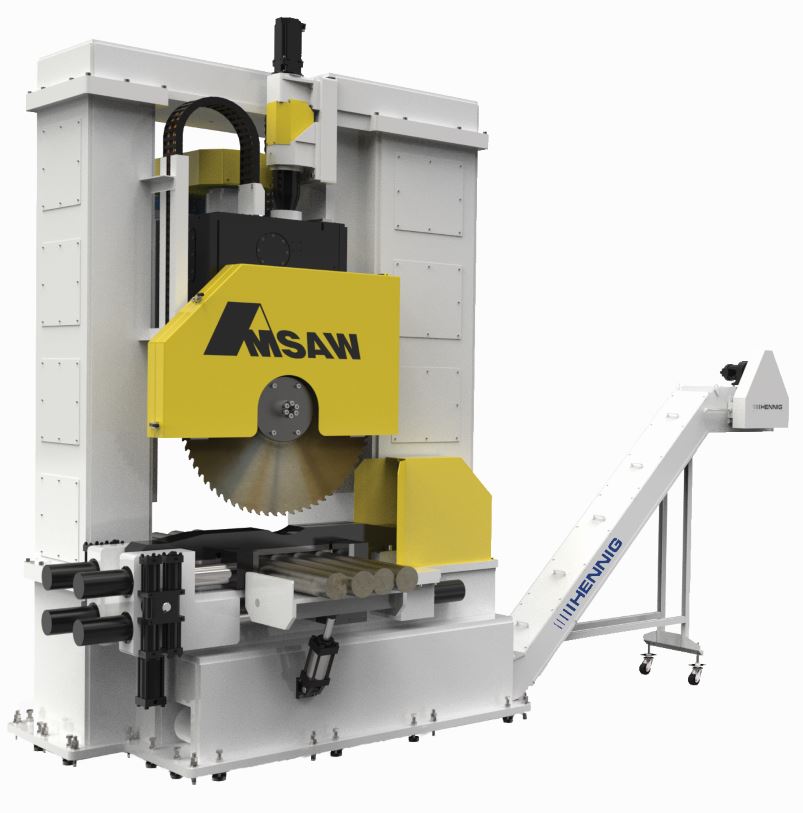 Optionally, a mechanical rack and pinion centering fixture, as shown in the image above, are used instead of direct hydraulic cylinders that make the fixture stiffer. This can be especially important when the tubes deviate from the ideal shape. In these cases, chances are high that not all parts are clamped securely which can easily cause damage to the blade.

For layer cutting in smaller bar diameters, AMSAW offers a very compact and rugged pivot saw, which is much less expensive because box ways and gibs are replaced with a pivot mechanism. The heavy constructed head swivels on heavy taper roller bearings and is driven by a preloaded ball screw.

For lower production sawing at a more economical price point – special band saws can also cut layers or bundles. Because of the layer width, the band guides are further apart which are less accurate and less resistant to vibrations. To guarantee that the layers are laying parallel on the table, there is usually an additional clamping unit at the far end of the saw blade. 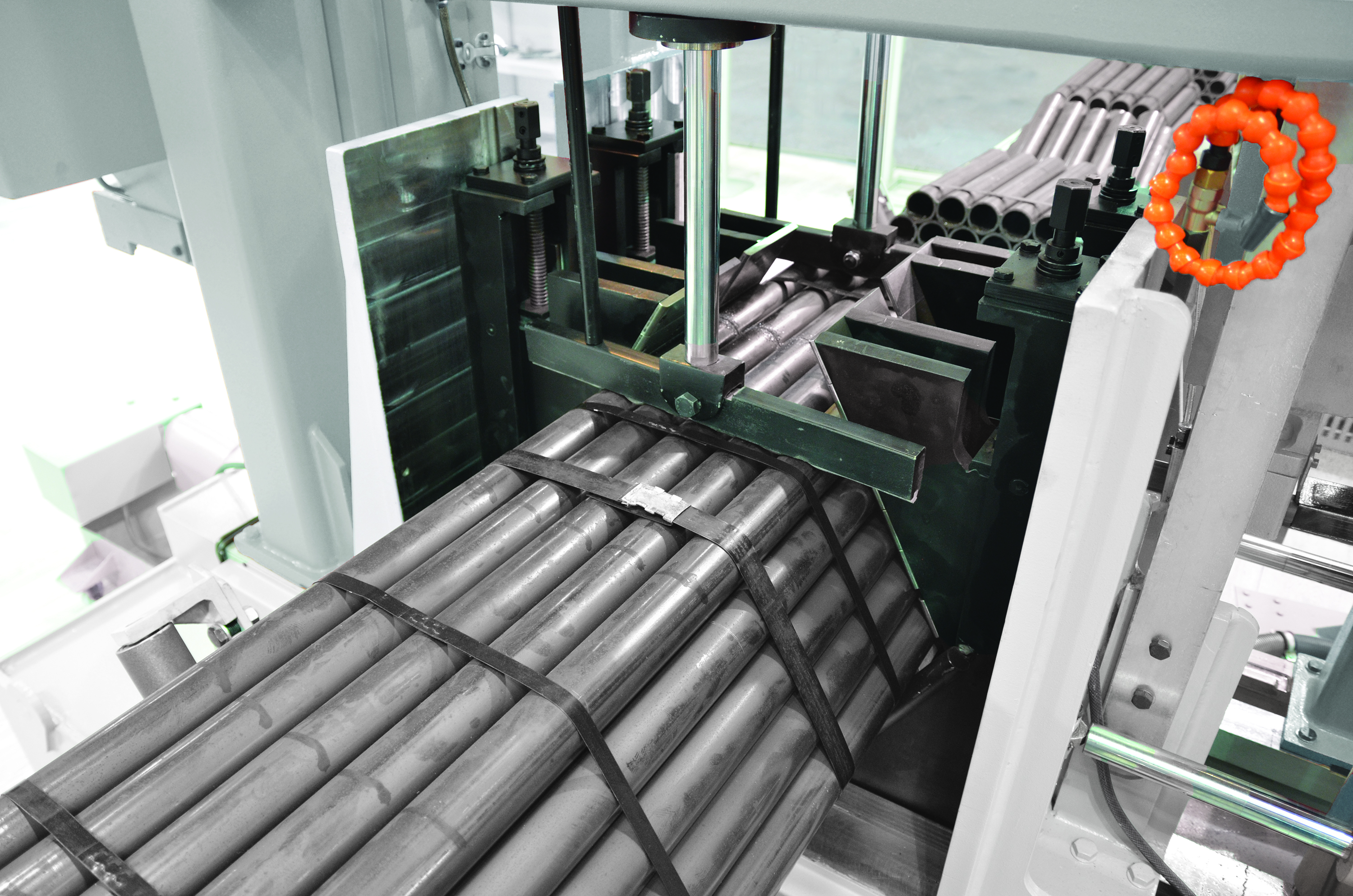 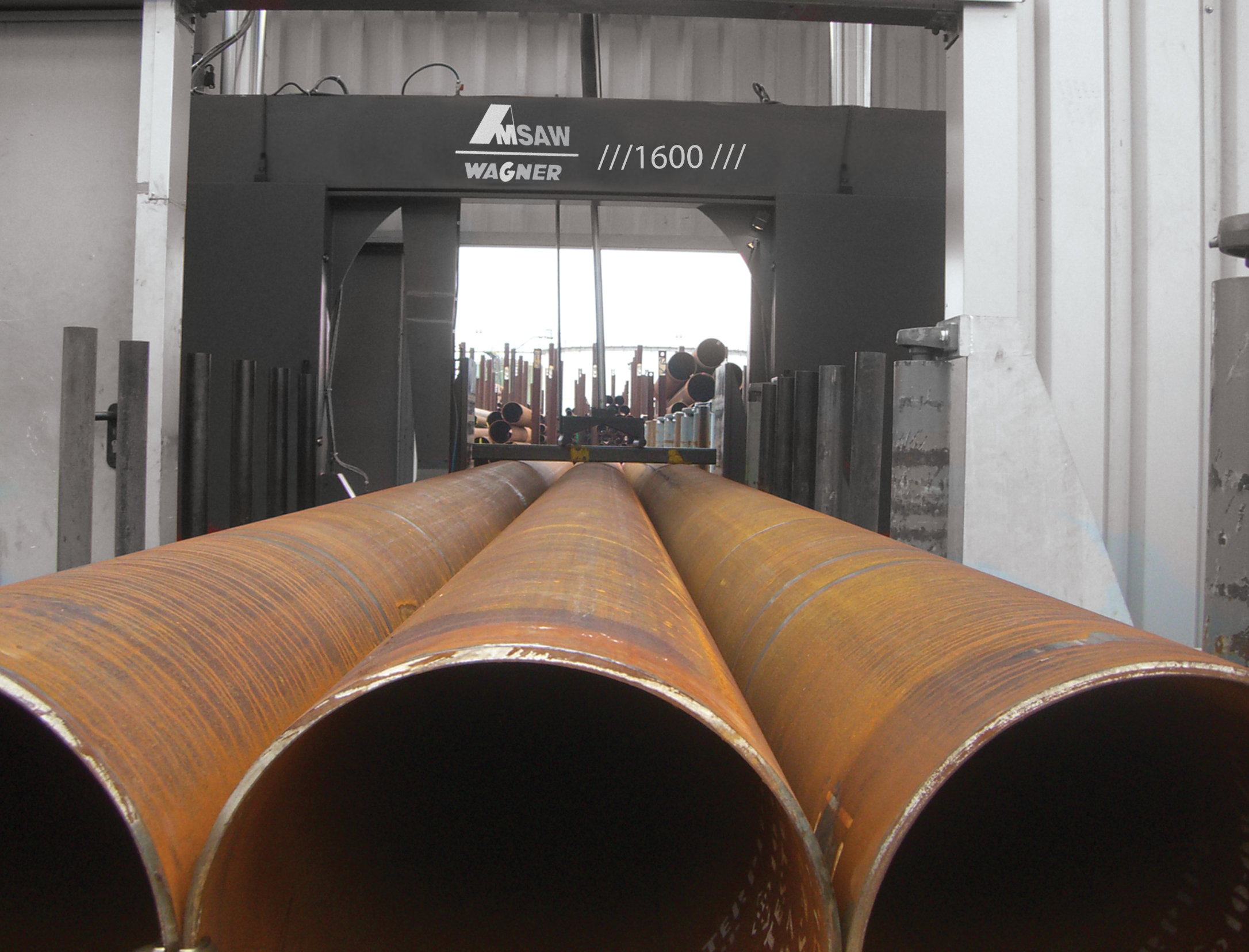 The automatic load table, the exit bar separation, and the unloading units can be very sophisticated and therefore, expensive. But because of the high production rate and the benefits of automation, the higher cost can easily be justified. Layer saws are especially popular in the oil industry where large quantities of tubing must be cut to then be welded together for oil pipelines. Forging shops are also cutting large quantities of solid bar stock, but are usually shorter cuts, less than 1m long.

The saw usually has a horizontal and vertical clamp unit on both sides of the blade to allow the bars to separate before the blade is retracted. Another common features of layer saws, are dual hydraulically actuated scrap tipping tables (arranged on both sides of the saw blade) used for trim cut and crop cuts. Another way to increase tool life is a retracting spindle mechanism, which backs off the blade from the cut surface after the cut, before the blade is retracted, to avoid damage to the teeth.

In conclusion, because of the intricacies in advanced sawing systems, projects are most successful when the machine designer, the machine builder, the blade manufacturer, and the machine operator work together closely.