One of the basic rules of engineering design is that it’s “done with numbers”, rather than with vague assertions about the properties of the system being designed. There isn’t much use in saying that we want our workholding systems to be “really stiff and strong” without specifying what that means.

Consider how you would react if a customer came to your shop asking for quotes, and said that they wanted the part dimensions to be “very precise” and the surface finish to be “super smooth”. You’d probably think the customer was naive! When you go shopping for workholding systems it’s critical to know what level of performance you need to avoid being that same type of customer.

In that spirit, we’ll learn how to estimate the magnitude of cutting forces during a machining operation. Using that information we can specify what performance we require from the components selected for our workholding system.

Two of the most important requirements of workholding systems are:

The first requirement simply means that however the workpiece is held in the fixture, it will not loosen or be pulled out of the fixture by the cutting forces. The second requirement recognizes that tolerances and surface finish must be held, which means the workholding system cannot deflect or vibrate excessively.

In milling, the edge of a rotating tool is forced through a stationary workpiece to form a chip. Most milling cutters have multiple cutting edges, and as the tool rotates each edge engages the workpiece, removes a chip, and exits the workpiece.

The figure below shows a top view of a slotting operation using a 2-fluted cutter. The cutter is rotating clockwise and is being fed into the workpiece towards the right. The crescent-shaped area bounded by the dashed line is the chip that will be removed by this edge. The next edge will remove a similarly shaped region. The thickness of the chip as it is removed is zero when the edge first engages the work, grows to its maximum value after 90 degrees of cutter rotation, and then drops back to zero when it exits after 180 degrees of rotation.

At any instant during the rotation, there is a cutting force component known as the tangential cutting force, Ft, acting on the edge of the cutter that is tangent to the cutter body. The magnitude of the tangential force is proportional to the axial depth of cut, b, the instantaneous chip thickness, t, and is dependent on the type of material being cut. 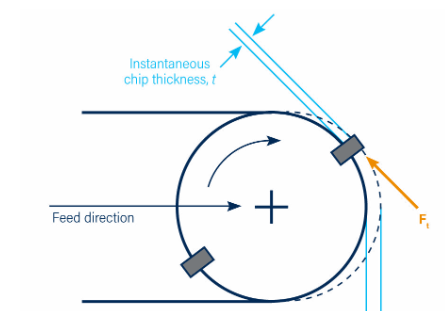 As this figure shows, the cutting force is not constant in either magnitude or direction. This is a characteristic of almost all milling operations and is different from lathe operations where the single cutting edge is constantly engaged with the workpiece as it rotates, and the resulting cutting force is nominally constant.

Another thing to consider is if the tool has more than two cutting edges, each contributes its own cutting force, and the workholding system must be designed to counteract their combined total. If the cut uses a partial radial engagement (less than a full slot), the situation changes again with regard to when edges are in or out of the workpiece. If the radial engagement is less than half the cutter diameter, the maximum chip thickness never reaches the “feed-per-tooth” value, f.

It might seem hopelessly complex to calculate cutting forces. Since they vary continuously during a cut, the workpieces held may vary substantially in size, shape, and material, and each different part being machined may use many different cutters. Fortunately, in engineering design, we don’t generally try to analyze every single loading situation a structure might encounter in use. Instead, we want to create our design so that it is capable of withstanding the highest loads expected.

For example, a bridge designer doesn’t bother to calculate the stresses of every weld in the bridge for the case of a small child on a bicycle crossing alone. Instead they base their analysis on their estimate of the largest loads that might ever be encountered, like a closely spaced military convoy of tanks crossing the bridge. Let’s do the same for workholding systems.

Machining is a subtractive process in which every workpiece starts out with an initial volume, and ends with a smaller, final volume. Generally speaking, the larger the volume of material to be removed, the longer it takes to machine it away. One key to minimizing cycle time is to maximize the material removal rate, or MRR; and high MRRs generally mean higher cutting forces and require higher spindle powers.

Most cuts do not consume the full spindle power, although it is good practice to maximize MRR as much as possible, considering constraints on tool breakage and wear, and surface finish. Nonetheless, it makes sense to see how high the cutting forces are when the spindle is operating at its full capacity and MRR is maximized and use those values when we analyze the workholding system components.

For most machining operations it is easy to calculate the maximum value the total cutting force can reach using the rated power of the spindle motor. The simple formula below uses only three inputs, the spindle power, P, in horsepower, the spindle speed, n, in rpm, and the tool radius, rtool, in inches; and gives the cutting force, Ft, in pounds. This relationship holds despite the material being cut, the type of cutter used, the tool path, or the selected feeds and speeds.

For instance, suppose your milling center has a spindle that is rated at 30 HP and you are cutting with a 1-inch diameter tool at a spindle speed of 2500 rpm. The tangential cutting force will be Ft,max=1512 lbs when the spindle operates at max power, and somewhat less than that for any operation that does not consume the full power of the spindle. The workholding system must be sturdy enough so that forces of this magnitude don’t loosen the part, and any resulting deflections or vibrations don’t cause problems with tolerances or surface finish.

Not all machine tool OEMs provide information about spindle torque to their customers, and in that case, we will need to rely on the max power to estimate the maximum cutting force that might be exerted on the part, and thus on the workholding system.

If you know the maximum torque rating of your spindle motor, Tmax, it is easy to calculate the max cutting force using the formula below, where Tmax is in inch-lbs, and rtool is in inches.

If the maximum cutting force calculated from the spindle torque rating is higher than from the maximum power rating, then we will use that value. In practice, the two estimates are usually similar, and since we will be using generous safety factors either is suitable for our purposes. 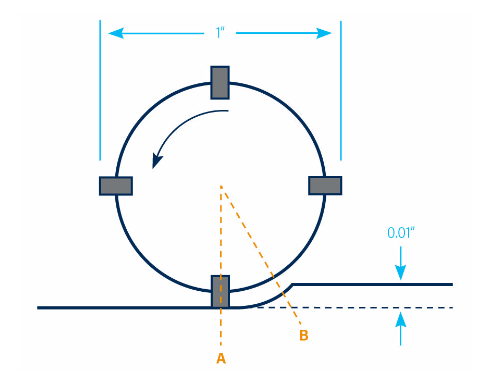 From this diagram, we also see that a single cutting edge cannot engage the workpiece for more than 180 degrees of tool rotation in a slotting cut. Most milling operations use less than a slotting cut, so the tooth’s angle of engagement in the work is even less.

If the radial depth-of-cut is low, the tooth may only engage for a small part of a tool revolution. For example, consider a finishing operation using a one-inch diameter end mill with four teeth, as shown in the figure below. If the finishing pass removes 0.010” of material, the cutting edge enters the workpiece at Position A and leaves it at Position B. A little trigonometry shows us that the tooth is only engaged with the workpiece for 11.5 degrees of rotation. The next tooth doesn’t engage the workpiece for another 78.5 degrees of rotation, meaning that there is no contact with the workpiece for approximately 88% of the time. During that time the cutting force is zero.

The cutting force here is actually a series of short pulses that occur at the tooth passing frequency, and anyone who has operated a milling machine will now understand that the process’ distinct sound is actually caused by the varying force as each tooth engages and leaves the workpiece. This is part of all milling operations and can lead to excessive vibrations if the workholding system is not properly designed.

In extreme cases, if the workholding system is too flexible the vibrations can turn into full-blown chatter, resulting in poor surface finish and even damage. The dynamic vibrational response of the workholding system to the periodic variations in the cutting force should ideally never be the limiting factor in how aggressive the machining operation can be in pursuit of maximizing MRR to lower cycle time.

In this post, we learned how to use the maximum rated spindle power of a machine to estimate the maximum cutting force that the machine tool can ever generate and therefore exert on the workpiece and its workholding system. We also saw that the cutting force is not constant in milling operations, but varies at the tooth passing frequency, potentially causing vibrations that may lead to poor surface finish.