Manufacturers in Illinois often feel like the odds are stacked against us.

There are easier places to start and grow a manufacturing business (less regulations, lower tax rates etc.), but most of us believe that change is possible here in our home state.

Illinois Manufacturers aren’t going to give up.

To create the change we hope to see, businesses and government officials need to work together.  Stimulating the growth of manufacturing is the key to reviving the state’s economy. Cooperation between the public and private sector is the only way we will balance our budgets and springboard our economic progress.

Governor Rauner gave a speech at the Technology & Manufacturing Association in Schaumburg, IL on "Manufacturing Day" Friday October 5th, 2018. He outlined some key initiatives that he believes are crucial to the success of manufacturing in Illinois.

Frankly, a successful manufacturing industry is the cornerstone of economic progress, not only for Illinois, but also for the United States.
But, there’s a problem with manufacturing in Illinois.
We need to grow our understanding of what makes manufacturing successful, and what doesn't.

According to Rauner, "We have twice as many regulations as most neighboring states. Of course some regulations are necessary, but twice the regulations has not created a workplace that’s twice as safe, or twice as healthy.” Some of the decisions our state has made has slowed down manufacturing progress, making it difficult for Illinois to compete.

Rauner says “We’ve added 210,000 jobs in the state of illinois under my administration. In the 12 years prior to that, only 60,000 jobs were added total.” The governors goal is to add half a million more jobs during his next term with most of them being in manufacturing.

He believes to accomplish that goal, Illinois needs to become the nation’s leader in apprenticeship programs, starting at the high school level. 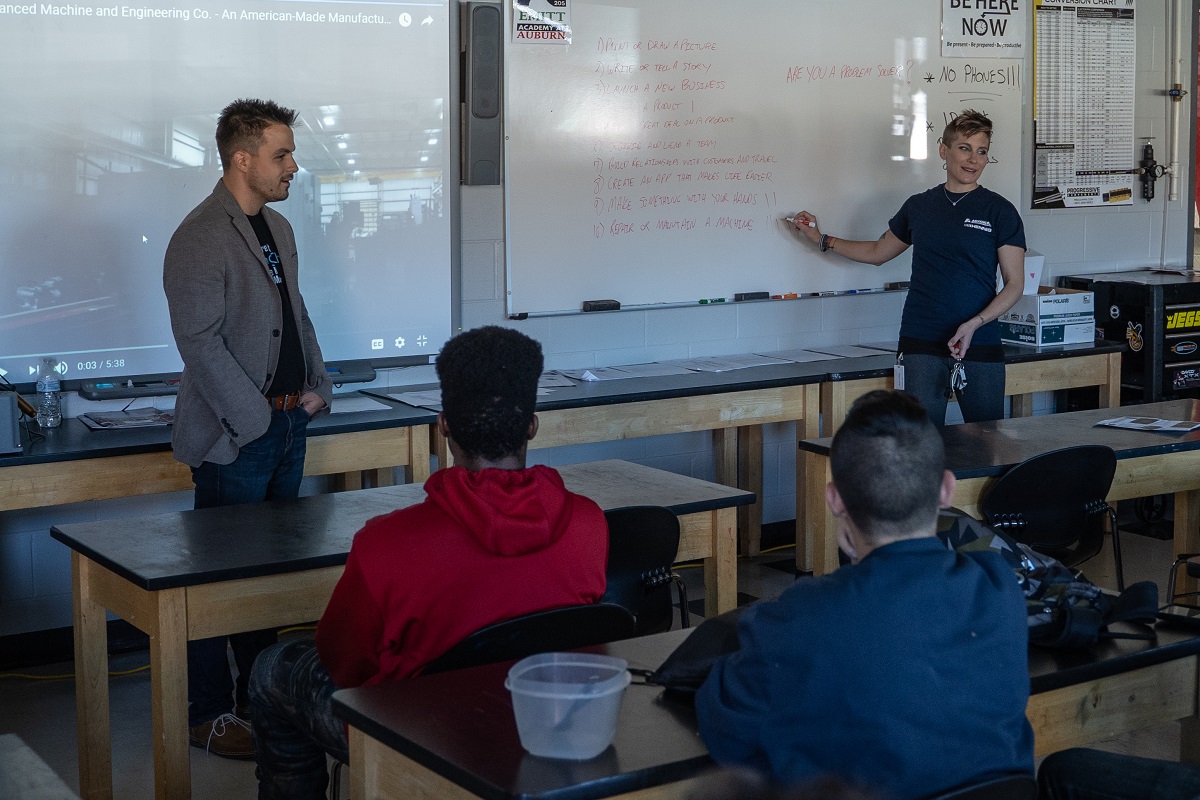 AME - An Evangelist for Manufacturing Apprenticeship

Advanced Machine & Engineering (AME) recently visited Auburn High School to talk with a group of students about the different types of career opportunities in manufacturing.  We wanted to dispell the 4D's of manufacturing, explaining that manufacturing is no longer dangerous, dark, dirty, or dull.

Watching videos from Kuka and Festo showed the wondrous possibilities created by the combination of advanced engineering and advanced manufacturing.  We were amazed how excited they were to pursue an education in manufacturing.

Many of the students requested more information on the apprenticeship program at AME, as they looked forward to touring the facility. One student asked, “Will we have the opportunity to get hands on experience in your shop?”

We believe that the best way to learn is by doing.  It was encouraging to see that the 16 and 17 year old students were so willing to dig in.  After all, young developing minds are able to grasp new skills and concepts much quicker than older students.

Governor Rauner hit the nail on the head when he said that “manufacturing education should start at the high school level or even earlier.” At the end of the day, productivity is more about people than products, so we need to invest in the manufacturing talent of tomorrow.

Keeping Illinois’ Innovators at Home in Our State

Illinois is filled with a history of talent and innovation. Rauner mentioned that many of the world’s most innovative and disruptive minds behind Paypal, YouTube, Netscape, Oracle, Siebel Systems, Tesla Motors, and iTunes were educated right in this state.

These ideas were born in Illinois but they were raised in other states.

Consider the positive economic impact that universities like Stanford and Berkeley have had on California.


Consider the impact that universities like MIT and Harvard have had on New England economies.


Why should the talent and innovation that comes from Illinois universities leave the state only to prosper in other economies around America?

The Return On Investment for Engineering Education

Advanced Machine & Engineering’s CEO, Dietmar Goellner, has a Master’s degree in Industrial Engineering from University of Illinois. His education has had a tremendous impact on the local manufacturing industry in Rockford. For the past 50 years AME has grown continuously.  Surviving poor economic cycles and capatalizing on the good times, AME now supports over 150 manufacturing jobs, an accomplishment that contributed to the 2018 Manufacturer of the Year Award by the Rockford Chamber of Commerce.

AME is now partnering with Northern Illinois University College of Mechanical Engineering to help fulfill their mission of bridging theory with practice.

Federico Sciammarella, Mechanical Engineering Chair at NIU, describes how the program delivers real value for both the university and the business: “This is what we thrive on with programs like engineers in residence (EIR) where our students work on real-life problems from industry with a faculty mentor and provide real solutions. It is a very popular program and projects can range from a few weeks to several months depending on the problem.”

Governor Rauner also mentioned his role in gaining the biggest transportation grant in Illinois history. He noted that the expanse is not projected to add any new taxes and will be accomplished through public and private partnerships.  He described Illinois as the “heart of transportation in America”, explaining that Illinois is the only state with all seven class 1 railroads.

He also described Illinois as the “heart of the interstate network”, but still believes we are not investing enough in transportation. Rauner suggests investing more in airports, interstate highways, and rail systems to expand the state’s transportation infrastructure.

This is an exciting proposition for industrial companies like AME that benefit from the growth in transportation industries. AME produces high-production sawing and drilling machinery for the rail manufacturing process. An increase in rail manufacturing creates more jobs and more opportunities for growth at the company.

The governor suggests that to continue to invest without raising taxes we must keep an open mind to new revenue sources noting the large gaming revenues generated by neighboring states. 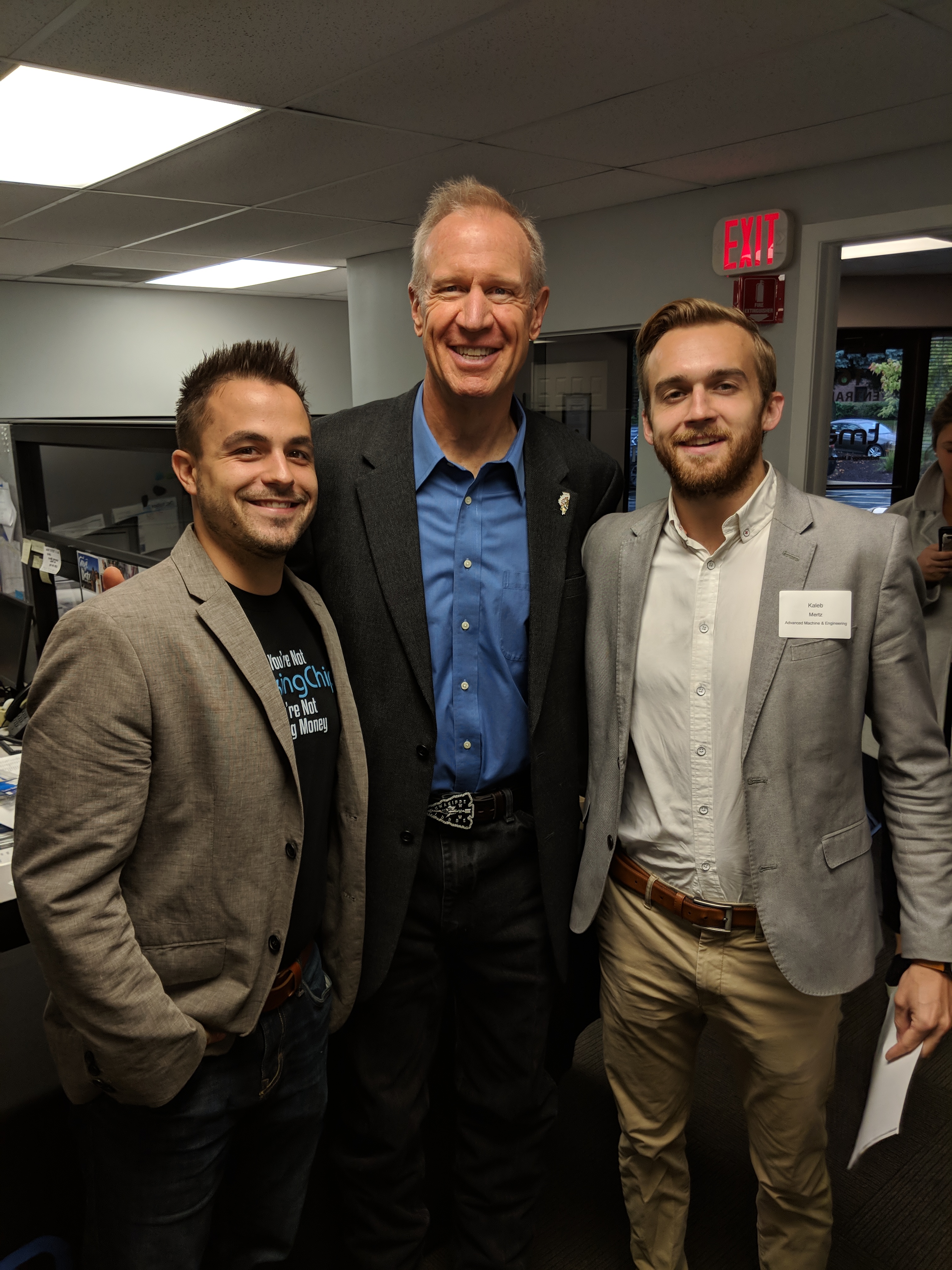 Investing in Manufacturing is Common Sense - Not Politics

Rauner loves being the governor of Illinois, but he also described his position as a thankless job with a lot of loss. He laughed as he mentioned losing 22 pounds and most of his hair, but was more serious as he mentioned the frustration of losing friends who had started manufacturing businesses only to move them out of state.


He said “this is not about partisanship, it’s about common sense.


The only way we will balance our budgets in Illinois is if the economy grows faster than government spending. The fastest way to make the economy grow is to invest in manufacturing.”

He thanked the room for being entrepreneurs and business builders, saying “You are our future.”


And as Illinois manufacturers, we thank our governor for supporting the investments in our future.