Spider-Man is now swinging all over the New York stage during his new Broadway production at Foxwoods Theater. In order to create magic on stage, PRG Scenic Technologies and Fisher Technical Services were tasked with assembling the right team for the job.

PRG Scenic Technologies reached out to Atlantic Industrial Technologies with their vision. During discovery, it was determined that hydraulic power of 600 GPM at 2000 psi would be required to move all eight platforms 14 ft vertically up to 3 ft/sec. Each platform serves as a small stage with live actors, so the engineers at Atlantic Industrial had to get creative to design a hydraulic system that would be able to control and propel the platforms at high speeds while keeping the actors’ safety the top priority.

How They Did It

Working within the limitations of the theater’s infrastructure, Atlantic Technologies equipped the theater with a bank of accumulators to supplement the pump flow - delivering up to 600 GPM during peak demand.

The hydraulic system drives several types of stage platforms. Even though the stage was divided into three separate sections, they installed Parker D91FH hydraulic servovalves and software to allow it to move and appear as one single platform with the ability to propel actors vertically at 4 ft/sec. 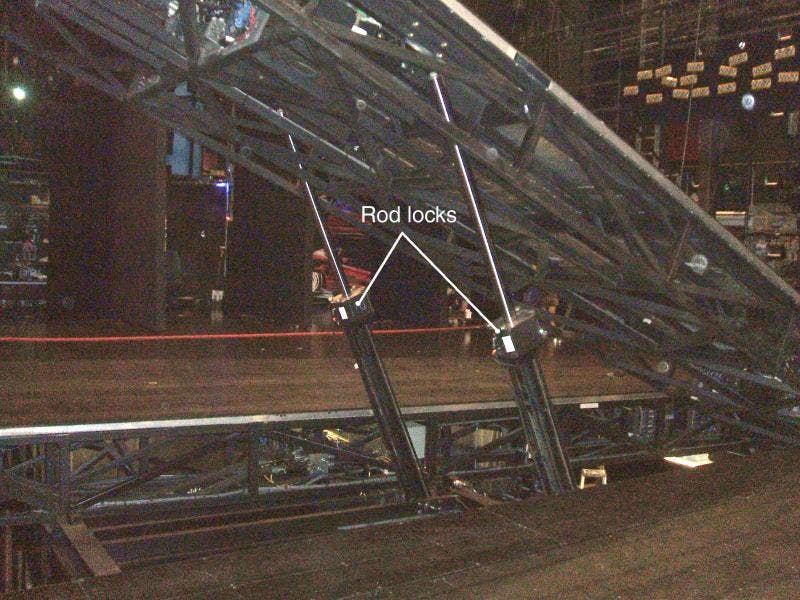 The platform cylinders were equipped with mechanical rod locks, preventing unintentional movement by releasing when supplied with pressurized hydraulic fluid. Each of the lifts has two cylinders that are mechanically linked to each other within a tight space. These close quarters make it difficult to equip the cylinders with rod locks, so a custom-designed counterbalance valve manifold serves each pair of cylinders on the lifts. This ensures that the lift will always hold position, even if the hydraulic line breaks.

The cylinder motion is controlled by a valve manifold mounted nearby that provides two separate functions:

During a show, the D08 D91FH servo-style proportional valve from Parker Hannifin controls the lift. When necessary, a single D03 lever valve located on the lift control manifold overrides the main D08 valve to fully lift the platform, and also raises a fire curtain to seal off the backstage area from the house.

The second type of stage platform, consisting of three 30 ft wraps extending downstage to upstage, lifts in a raking style. When the back of the ramp lifts up, it also moves towards the audience. It uses six 3.25 in bore tie-rod cylinders with 2.5 in rods and 114 in strokes to operate the ramps. 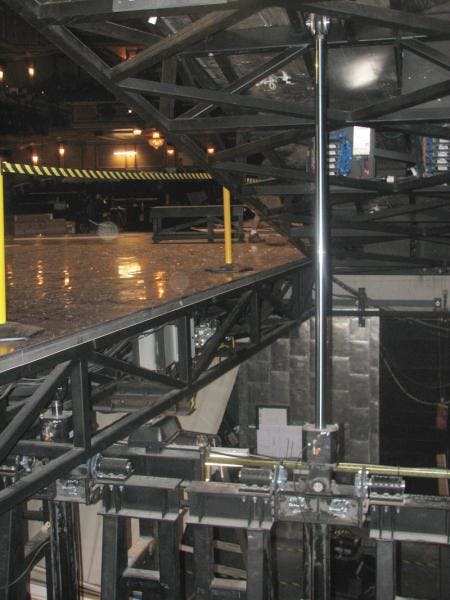 All of the ramps are able to operate simultaneously and appear as one stage lifting the 14 ft upstage. The hydraulic servovalves and controls designed into the system by PRG Scenic Technologies bring the stage to life and make the high-speed movement of four individual stages seem like one. Each of the Parker Type 2H cylinders, equipped with SAE O-ring ports for a leak-free operation, contain an integral magnetostrictive linear position transducer from Balluff to provide continuous feedback of cylinder position. To keep the platform in place once it reaches its set position, AMLOK rod locks were fitted to the front flange of each cylinder.

Just like Spider-Man, our team is always looking for ways to keep everyone safe. The holistic challenge of creating this robust and seemingly limitless platform was as exciting as it was daunting.  AMLOK’s rod locks and other press safety devices were the perfect solutions to ensure everyone both on stage and off were kept safe. The position and hold cylinders provide a reliable, precise holding with redundancy.

Want to learn more about our Rod Locks and Press Safety devices? Visit our website here or download our Complete Guide to Power-Off Clamping.

This content has been syndicated from our friends at Hydraulic & Pneumatics.